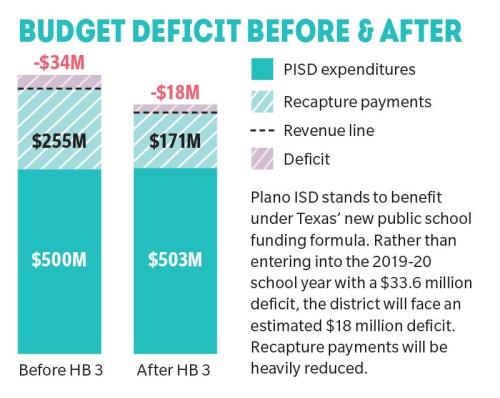 Plano ISD stands to benefit under Texasu2019 new public school funding formula. Rather than entering into the 2019-20 school year with a $33.6 million deficit, the district will face an estimated $18 million deficit. Recapture payments will be heavily reduced.

Advocates are hailing a new Texas education spending bill as a win for public schools, but Plano ISD will enter the 2019-20 school year with an $18 million shortfall and less money than expected to provide for teacher raises.

PISD’s current projected deficit is an improvement over the $33.6 million shortfall projected under the previous school finance system. But the district will still have to rely heavily on reserve funds to plug the holes in the budget this coming school year, officials say.

That is because two of the district’s major revenue sources will provide millions of dollars less under the new spending bill, House Bill 3. In addition, the district has pledged to give raises to teachers and staff despite its budget shortfall.

School districts like Dallas ISD stand to save tens of millions of dollars under the new funding bill, but that is not the case for PISD.

“When you put all the money in the pot and reshuffle it, districts like us didn’t fare very well,” PISD Chief Financial Officer Randy McDowell said at a June 25 board meeting.

Still unclear is what the latest school finance system means for future years. But PISD is anticipating it will face some hard decisions with subsequent budgets.

Some education advocates are hailing the legislation as a home run for Texas public education.

Libby McCabe is a senior policy adviser at the Dallas-based Commit Partnership, which includes PISD among its partners. Some of the notable wins include financial incentives for student college and career readiness, more money for teacher raises and the funding for full-day pre-kindergarten programs, McCabe said.

One benefit for PISD this year comes from a substantial reduction in its annual recapture payment. Recapture, also referred to as “Robin Hood,” is a policy in which the state pulls tax revenue from property-wealthy school districts such as PISD to help fund other districts.

As of this paper’s print deadline, McDowell said PISD did not have forecasts beyond 2019-20.

But projections from the state’s Legislative Budget Board show PISD’s recapture payments will increase to $180 million in 2020-21. That’s a $9 million increase over next year’s estimated recapture payments. Those figures are still less than the amounts PISD had been paying into the system the previous year.

For comparison, Dallas ISD is expected to send only $12.3 million in recapture next year, according to the Legislative Budget Board. That is $174 million less than what DISD would have paid under the previous funding laws.


A look at the numbers

Before the passage of HB 3, PISD warned its reserves could be substantially depleted within four years. The district has said it “could not sustain [that]  without cutting programs and salaries.”

The new law cuts the district’s projected shortfall from $33.6 million to $18 million for the upcoming school year.

“This district has experienced times of extreme financial difficulty,” PISD Superintendent Sara Bonser said at the June 25 meeting. “There is still some work to do, but the hole is not as deep.”

PISD’s realized savings largely come from an $83.6 million reduction in the district’s recapture payment for next year.

However, the district’s two major revenue sources will provide $64.7 million less this year than they would have under the previous school finance system. Those two sources are revenue from funds provided by the state and local property taxes.

Even as the state upped its share of contributions to districts across Texas, it reduced its contributions to PISD. Where it would have provided $46.3 million to the district in 2019-20 before the law passed, the state will now provide only $37.5 million, according to PISD.

District officials were prepared to adopt the same property tax rate for the new school year. As a result of HB 3, that rate will be compressed by $0.1016 per $100 valuation. The average Plano home worth $369,050 would save an estimated $350 next year with the lower rate.

At the PISD June 25 board meeting, trustees also approved the district’s 2019-20 compensation and benefits plan.

For comparison, a $5,000 raise initially sought by legislators in HB 3 would have represented a 9.4% increase over PISD’s 2018-19 base teacher salary. That figure was ultimately struck from the bill.

“I know my colleagues are going to be devastated by this,” said Jennifer Lorilla, a PISD special education teacher who attended the meeting. “I’m real worried about our district as a whole. I’m worried about the morale related to this budget, and I hope that we can reconsider and try to put the numbers together and move forward with a good-faith effort.”

HB 3 requires school districts to use at least 30% of their realized revenue gains for increasing teacher salaries. Because PISD is operating with a deficit, McDowell said the district is technically not required to hand out raises.

But the salary increases included in the plan represent about half of PISD’s savings from HB 3, Bonser said.

“The result [of HB 3]  is that there was a lot more money put into public education in the state of Texas,” Bonser said. “But when the formulas come out, the impact on Plano ISD, as you see, is about an $18 million difference for us, and half of that is going to employee compensation and benefits.”

Bonser announced June 25 meeting that she would not take a salary raise next year in light of the circumstances.

Trustee David Stolle recognized that the smaller raises come as a disappointment for many teachers.

“I feel for you guys,” Stolle said. “I understand your frustration. I’m going to support this [compensation plan]  because I want for our teachers to at least keep up with the cost of living, and I think that’s the bare minimum of what we can do.