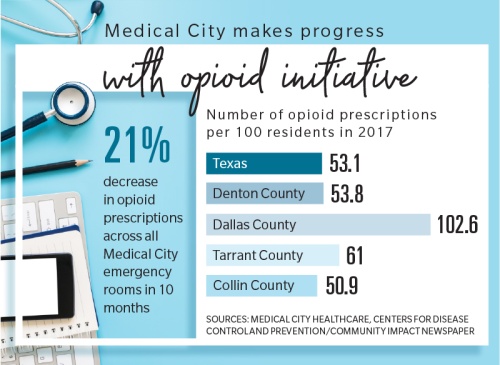 Plano hospitals are working to reduce their opioid prescription rates to combat addiction and lower overdose risk for their patients.

Plano’s major hospitals for adult patients—Medical City Plano, Texas Health Presbyterian Hospital and Baylor Scott & White Health—are each reporting early results in their respective initiatives to address the opioid epidemic, which the Centers for Disease Control and Prevention have classified as a national health crisis.

“If somebody has nerve pain, we can use medication for nerve pain and combine it with a muscle relaxer,” Babber said. “And we can also use anti-inflammatory [medications]. These are non-opioid medications.”

“Really, the goal is to reduce the prescribing or use of opioids before or during surgery,” he said.

“Our hospitals are doing a great job of monitoring the types of medications they’re prescribing, using alternatives to opioid medications whenever possible and then, giving only a limited prescription until patients can get to a primary care physician and be managed,” Kendrick said.

In 2017, more than 70,000 people in the U.S. died from drug overdoses, and 68% of those overdoses involved opioids, according to CDC data. During that same year, there were about 51 opioid prescriptions per 100 residents in Collin County, CDC data revealed.

Although some areas of the country have been hit harder than others by opioid addiction, no region is exempt from its effects. Babber said the opioid crisis does not discriminate based on demographics, age or socioeconomic status.

“We see it in all facets of the community,” he said.

Breana Bohannan, treatment center director with AppleGate Recovery Lewisville, said she has seen firsthand how prevalent the opioid epidemic is. The center offers medically assisted treatment to those struggling with opioid addiction.

“We’re all human, and we all have healthy and unhealthy coping skills,” Bohannan said, “and no one who reaches for that alternative expects the dependency aspects of opioids—much less death.”

In the Medical City system, the opioid initiative is three-pronged. The first phase, which launched last year, focuses on lessening the number of opioid medications prescribed in Medical City emergency rooms. The final two phases, which focus on reducing the use of opioids in surgical recovery and on educating the community, respectively, were launched in September.

Dr. Glenn Hardesty, an emergency physician who is in charge of the Texas Health system’s efforts to reduce opioids, said Texas Health Presbyterian Plano now collects and monitors prescription data in an effort to better catalogue opioid use.

“It allows caregivers to see the controlled substance history of patients and identify those with opioid use disorder,” Hardesty said in a written statement. “As a system, Texas Health has embedded the PMP into the electronic medical record. Caregivers no longer have to log into a separate system to see a patient’s opioid history.”

Post-surgery patients in the Medical City system now receive virtual reality headsets, which are meant to help with pain management by providing a distraction. The free headset connects to a smartphone and allows users to immerse themselves in a 360-degree virtual environment of their choice.

In a pilot study conducted by Medical City Healthcare at its hospitals, 35% of patients who used the virtual technology reported reduced pain, and more than 60% said they had less anxiety after using the technology, Medical City Lewisville CEO LaSharndra Barbarin said.

Texas Health hospitals have also had success with approaches that integrate some non-opioid alternatives, such as Tylenol and Motrin, with other pain relief methods, Hardesty said.

“We found that by using non-opioid pain medications, such as ibuprofen and acetaminophen—it reduced patients’ length of hospital stay, patients had better outcomes, and it’s a lower cost of care,” Hardesty said.

The Medical City initiative also focuses on educating the community about the dangers of opioids and the importance of disposing of unwanted medication safely.

Drug take-back boxes were installed in September in 12 Medical City hospitals, including Medical City Plano, to provide locations to safely and anonymously drop off prescription opioids and other unwanted or expired medications.

Babber said the dropoff boxes are an important option for patients because there are very few safe ways to dispose of unwanted medications.

“If people don’t have a safe way, they generally flush it down the toilet or they leave it in their house,” Babber said. “That’s dangerous because flushing it down the toilet is hazardous to our environment. If it’s not safely disposed and it’s in your home, then friends or family members may have access to it.”

Bohannan said for people already struggling with opioid addiction, a list of local treatment resources can be found on the federal government’s Substance Abuse and Mental Health Administration website.

“This is a huge epidemic to face alone,” Bohannan said. “And in the treatment community we have, we’re here to help individuals navigate into recovery.”
SHARE THIS STORY