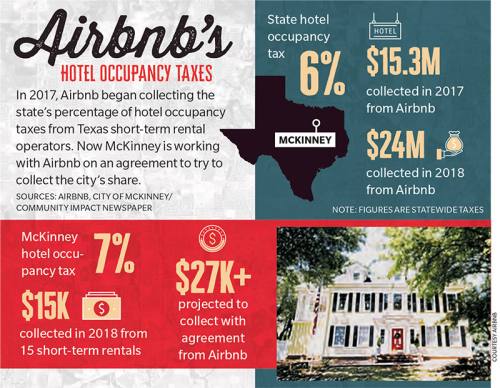 Visit McKinney officials say the historic downtown area is one of the most popular places for visitors. The Neathery Estate Bed & Breakfast in downtown Mckinney is a commercial business that is also listed on the Airbnb site. But as a registered bed and breakfast, the owner handles all the taxes and adheres to additional city regulations that a typical Airbnb rental does not.

The city of McKinney is looking to Airbnb for help collecting thousands of dollars in local hotel occupancy taxes from residents renting out their properties to visitors.

McKinney has been collecting local lodging taxes from 15 properties but estimates that at least 35 more are not paying, said Mark Holloway, chief financial officer for the city of McKinney.

And the city could be missing out on even more revenue. According to Airbnb, there are nearly 200 active short-term rentals in McKinney.

People renting their properties via Airbnb, Vrbo, HomeAway or any other short-term rental agency are required to follow the same laws as local hotels and bed-and-breakfasts when it comes to paying state and local hotel occupancy taxes, according to the city.

“We are trying to make sure we get those collected here,” Holloway said.

City officials are negotiating an agreement with Airbnb. Websites for Vrbo and HomeAway state that those companies are also collecting only the state of Texas’ portion of hotel occupancy taxes. Those state tax collections began April 1, according to Vrbo and HomeAway.

McKinney approached Airbnb earlier this year after the rental company announced Plano had become the first Texas city with an agreement to receive local hotel occupancy taxes directly from the platform, Holloway said.

In late August, McKinney received a draft collections agreement from Airbnb. That contract is still under review. McKinney expects to begin collecting local taxes through Airbnb in the next few months, Holloway said.

An Airbnb spokesman declined to answer specific questions about the contract and referred to a July news release for details.

“Collecting and remitting hotel taxes can be incredibly complicated,” the release stated. “The rules were designed for traditional hospitality providers and large hotel corporations with teams of lawyers and accountants. For this reason, Airbnb has partnered with over 400 local governments throughout the U.S. to collect and remit taxes, making the process seamless and easy for hosts to pay their fair share while contributing new revenue for local governments.”

Texas state lodging officials believe it is only fair to hold Airbnb and other short-term rental operators to the same tax standards as hotels.

“We feel it ought to be a level playing field … Short-term rentals should have to obey local ordinances with regard to paying the taxes,” said Scott Joslove, president and CEO of the Texas Hotel & Lodging Association.

Lodging facilities are required to pay hotel occupancy taxes to both the state and city in which they are located if city ordinances require them to do so.

Occupancy taxes come from room rentals, according to the lodging association, and are generally tacked onto the bill in addition to other fees, such as those for cleanings or extra guests.

The responsibility to pay these taxes falls to the owner or operator of the rental, McKinney Finance Director Trudy Mathis said.

City officials say they have been able to collect local lodging taxes from only 15 short-term rentals so far. Tax revenue from those properties totaled slightly more than $15,000 last year and almost $17,000 as of July this year.

“We do attempt to collect them now … We go out and we research what we can and try to find out who is in the business, and we try to collect, and we do a pretty good job of it,” Holloway said. “Hopefully, in the next month or in the next couple of months, we’ll be able to start having Airbnb collect those for us. They are fixing to be the middleman and collect these for everyone.”

According to Plano’s agreement, all Airbnbs booked within the city of Plano automatically charge a 6% state tax and 7% city tax, both of which are paid by guests at checkout as part of their bill. These taxes are collected by Airbnb from each transaction and are then sent directly to the appropriate source. Airbnb handles the taxes so property owners offering short-term rentals don’t have to.

“[Airbnb] is doing a service for all of these homeowners,” Mathis said.

The contract with Plano states that Airbnb is not responsible for collecting local taxes on any transactions prior to the agreement, which went into effect May 1.

Occupancy tax revenue must be used only to directly enhance or promote tourism and to support the city’s hotel and convention industry.

“Once cities secure collection of these local hotel occupancy taxes from Airbnbs, those taxes are subject to the same state law restrictions as all other hotel taxes,” Joslove said.

Airbnb’s presence has exploded globally since it started with its first booking in 2007. The company now manages more than six million listings across 191 countries, according to its website.

In McKinney, visitors have a variety of short-term rentals to choose from, such as tiny homes, loft apartments, guest rooms or entire houses. The average price of these rentals is often comparable with the cost of staying at a traditional hotel, depending on the property.

Airbnb declined to release any historical data about McKinney, but Airbnb spokesman Sam Randall said its hosts in all of Collin County brought in about $3.3 million in income between Memorial Day and Labor Day this year. Host income has grown by nearly 75% year over year in Collin County, he said.

This is because more guests are choosing to stay in local Airbnbs. During that same period, 16,474 guests stayed at Airbnbs in Collin County, nearly a 70% increase compared with that same time frame last year, Randall said.

Resident Britton Labombard said he has been renting his home near downtown McKinney for almost two years.

“I’m a flight attendant, so when I leave, I don’t like my house being empty,” Labombard said. “I would rather let someone else stay who is visiting the area and exploring the community. So it’s kind of a win-win. … Someone else gets to see the city while I am out seeing someone else’s city.”

Britton said he believes a potential collections agreement between the city and Airbnb would be helpful. It would be easier, Britton said, for collections to be conducted through the checkout process than for hosts to report their earnings and taxes each year. Britton said he has been paying the local taxes on his own.

“I’m all about doing this fairly, and if a tax [agreement] were to be had, it would probably affect my rates very marginally, if any, because those just get forwarded onto the customer,” he said. “I don’t see it hurting my business. I think it would just help the community.”