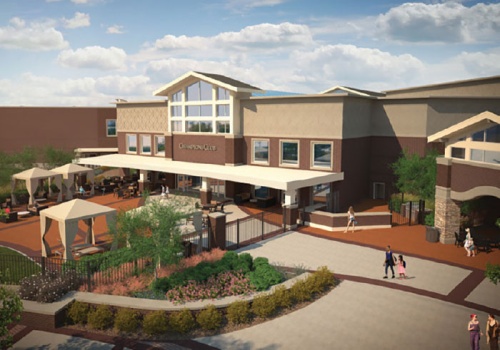 Champions Club at the Marq

Editor's note: A previous version erred in the fee listed at The REC of Grapevine for non-residents. The correct fee is $460 a year for non-Grapevine residents.

The Champions Club at The Marq Southlake is expected to open in mid-February or early March, offering a state-of-the-art fitness and aquatic facility to serve residents and nonresidents of all ages, including senior adults.

The Marq Southlake refers to the overall campus of the community center, made up of event venue Legends Hall and the upcoming Champions Club fitness center.

Southlake is only one of several area cities that is making a transition from a traditional senior activity center to a more inclusive community hub that offers programs for all ages.

Although there is an existing senior activity center in Legends Hall, the Champions Club will be more multigenerational with programs for different age groups. To purchase senior memberships at the Champions Club, individuals must be age 65 or older. However, residents who are age 55 and older can enjoy a free senior membership at the existing senior activity center, which will continue to operate.

There are many benefits to a multigenerational community center as opposed to a stand-alone senior center, said Chris Tribble, director of community services.

“We had an older senior activity center that served our community for many, many years, but we had outgrown that,” Tribble said. “The thought in developing The Marq [is] it’s a gathering place for all citizens, and so when Champions Club opens, there will be something there for everyone in the community.”

The city of Grapevine also incorporated its senior activity center into The REC of Grapevine when the recreation center opened in April 2015. The resulting multigenerational facility came at the behest of residents through a citizens’ survey, Recreation Manager Trent Kelley said.

“We brought [the recreation center and the senior activity center] together where everything’s under one roof,” Kelley said.

“We can have in one building the aquatics area, the fitness room, the walking track—everything that both populations want to use—and it just makes more sense to have it all in one building rather than to have two separate buildings,” she said.

Because there is such a variety of programming, senior adults can exercise, socialize and participate in different activities without requiring transportation, which is a big benefit as many senior adults no longer drive, Kelley said. It also allows seniors who provide care to their grandchildren a place that offers activities for both generations.

“It’s tough to call a place a community center and not include the whole community,” Kelley said.

Unlike its neighbors, the city of Colleyville does not have an open recreation center for all ages, said Lisa Escobedo, Colleyville Parks and Recreation director. However, the senior activity center does have some adult and children programs available after its regular operating hours.

Colleyville’s 2018 Parks and Recreation Master Plan does include a recommendation to explore ways to improve programs and facilities for the senior population, Escobedo said.

A survey indicated residents are interested in renovating and expanding the senior center, and there will be a discussion with City Council members on what that would involve, she said.

“It is an aging community, so the city of Colleyville is a prime location for expanding senior activities and things of that nature,” Escobedo said.
SHARE THIS STORY