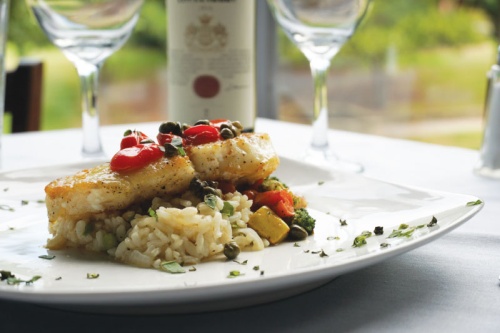 “I was a professional player back in Europe. I played there eight years,” Ceka said. “At the time, the money was not there. … Money was the reason why I switched to the restaurant business.”

Since its opening decades ago, Bruno’s Ristorante has expanded its space overlooking one of Valley Ranch’s canals. The menu has also seen an update and now prominently features steaks and seafood.

He listed off some of the recent menu additions, such as filet mignon, veal chop and rib-eye steak.

Seeking to spend more time with his family, Ceka sold off all of his other business interests, save for Bruno’s.

“I have two grandkids, so I want to spend some more time with them,” Ceka said. “That was the reason I … sold the restaurants, sold both shopping centers and just kept Bruno’s.”

Now celebrating his 30th business anniversary, Ceka has seen how the community surrounding his restaurant has grown over the years. That includes the growth around the Dallas Cowboys headquarters in Valley Ranch and the football team’s subsequent relocation to The Star in Frisco.

Ceka said he had been approached to open a restaurant at The Star, but he preferred to keep his business in Valley Ranch.

When Ceka is not at the restaurant or spending time with family, he is working with other Albanian community members and business owners in the North Texas area.

His work as president of the Albanian American Cultural Center of Texas includes sustaining the Albanian community’s language school as well as helping the other restaurant owners run successful businesses.