Despite rumors, there is not a gas shortage: Officials say North Texas stations will resupply fuel soon following post-hurricane demand 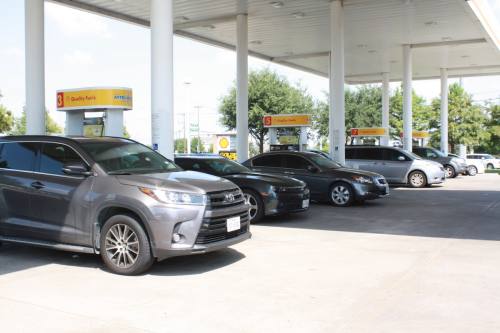 Some gas stations around the state have reported lines.

Motorists across North Texas are hunting for gas stations that still have fuel while eating the cost of increased prices.

Brad Douglass, CEO of Douglass Distributing based out of Sherman, Texas, said Hurricane Harvey is responsible for affecting 31 percent of the refinery capacity in the United States. Many facilities have shut down, and productivity on others have slowed, he said.

He asked for motorists to be patient.

“Don’t panic - we have plenty of motor fuel, it’s just our inability to resupply every store right now,” Douglass said. “The stores will be resupplied. There’s plenty out there.”

He said he expects fuel supplies to return to normal within a week.

In the meantime, AAA Texas is encouraging all drivers to be prepared.

“Drivers are encouraged to plan ahead for any road trips and should not allow their vehicle’s gas level to fall below a quarter of a tank,” said Daniel Armbruster, AAA Texas senior public affairs specialist. “Despite the country’s overall oil and gasoline inventories being at or above 5-year highs, until there is clear picture of damage and an idea when refineries can return to full operational status, gas prices will continue to increase.”

AAA Texas Weekend Gas Watch reported the statewide gas price average in Texas is $2.26 for a gallon of regular unleaded fuel. It is a four-cent increase from Wednesday’s average prices, and is 12 cents more per gallon compared to Thursday of last week.

Railroad Commissioner Ryan Sitton said in a press conference Thursday that Texas is missing out on about 2 million barrels of gasoline, but he emphasized that there are still 238 million gallons of gasoline in storage. There is not a supply issue, he stressed, there is a logistics issue.

Sitton attributed the hunt for fuel to a self-fulfilling prophecy for people who speculated that fuel supplies would run low, and spread their concerns to friends and family members.

“They’re taking gas tanks, suburbans and they’re filling up,” Sitton said. “That’s six to seven times the demand on every gas station. The big issue is people trying to get their hands on every gallon they can. My advice is if you can go three or four days without gasoline, hold off. Don’t stand in line. This is going to stem.”

Douglass said the demand for gas will result in “spot outages,” and this spike in prices and harder-to-find fuel will be only temporary. If drivers cannot find fuel at one station, he said they need to keep driving and find another.

That is what many drivers at the Shell Station at the corner of Preston Road and Lebanon Road in Frisco had to do. On Thursday, drivers waited up to two hours to get to a gas pump, with lines extending out to the roadway and wrapping around the building. By noon, the station was out of gas.

“This is crazy,” Amber Pineda said as she filled her car. “The station by my house was out of gas completely. I’m going to be late for work, but they’ll understand. They know it’s like this everywhere.”

One thing drivers will not have to worry about is price gouging, Douglass said. Because gas stations post the station’s prices in big numbers on outdoor signs, all a competitor has to do is look down the street to get a perspective on where prices should be.

“We’re all in this thing together,” Douglass said. “And people have a long memory of this kind of abuse, if somebody does decide to price gouge, people remember that.”

Click here to search for whether gas stations in your area have fuel.

Editor's note: This story has been updated to include comments from Railroad Commissioner Ryan Sitton.