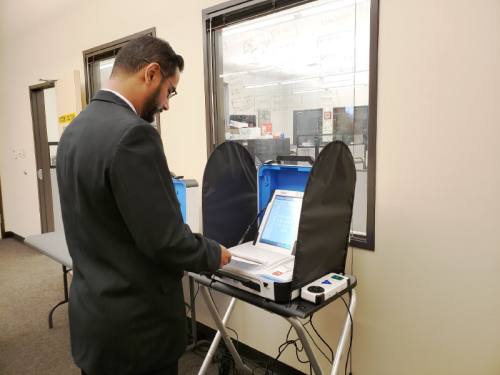 Tarrant County Elections Administrator Heider Garcia demonstrates how to use the new voting machines that will debut with the Nov. 5 election.

The new system, set to debut this fall and valued at $10 million, includes 3,000 voting machines and 400 ballot scanners. The county paid another $1 million for a two-year license.

“They have the electronic accuracy of the screen and everything, but we also gave voters what they were asking the [commissioners] court to give them—which is a paper trail for our elections,” Tarrant County Elections Administrator Heider Garcia said.

The Texas Secretary of State also approved a request for countywide voting, which allows voters to cast a ballot at any of the 340 polling places in Tarrant County. Voters can still go to their assigned precincts, but they also have the convenience of voting at any Tarrant County polling place.

County officials said they believe this fall is a good time to introduce the changes. Tarrant County saw record turnout in the 2018 midterm elections and expects high voter participation again in 2020, officials said. But this fall’s election, which has fewer ballot measures, is projected to have low turnout.

The county ballot will include 10 statewide Constitutional amendments. Voters in the city of Keller will decide whether to allow all alcohol sales, which would pave the way for liquor stores to open. Keller voters will also consider reauthorizing a $0.0025 sales tax for street maintenance. And in Keller ISD, voters will consider a $315 million bond to fund 11 projects on the district’s long-range facilities plan.

“It’ll be interesting to see how this goes,” county commissioner Gary Fickes said of the new machines. “I don’t think that this election this November is going to give us any indication of anything. You just don’t get the kind of turnout for what they call a constitutional amendment election.”

The previous voting system has been in place since 2006. Garcia said it created some confusion because it used two different methods.

“We used to have people who would come in to vote early and say, ‘Where’s my paper ballot?’” he said. “We’d say, ‘We don’t have one in early voting.’ [They would say,] ‘Then I’ll come back on Election Day.’ So, depending on when you voted, you had a different experience.”

The new system gives all Tarrant County voters the same experience regardless of when they vote, he said.

By law, voting machines are not connected to the Internet. That is one aspect that did not change with the switch to the new machines.

“You still have to physically collect the memory cartridges and the ballots from every location so that we can read them and then put them on the website,” Garcia said.

“If [the machine] does what they say it’s going to do, I think people will be happy with it,” he said.