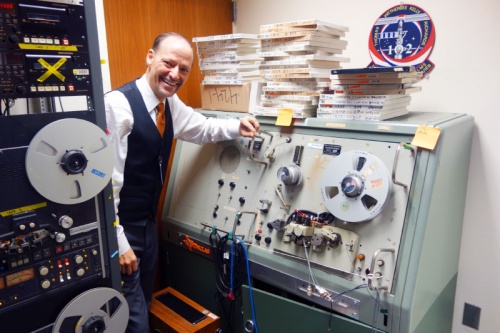 John Hansen had to rewire NASAu2019s Soundscriber to digitize the lunar mission tapes.

Engineers at The University of Texas at Dallas made a giant technological leap when they set out to process audio from various moon landing missions.

The Fearless Steps project, an undertaking of the Center for Robust Speech Systems at UT Dallas, is behind the 2018 release of more than 19,000 hours of lunar landing audio, most of which had never before been available to the public.

Over seven years, CRSS founder John Hansen and a team of engineering students digitized and analyzed tapes from lunar missions Apollo 1, 11, 13 and Gemini 8. New technology and software were invented along the way so that the audio could be studied and eventually published online.

“We thought this would preserve history and help identify people behind the scenes who quite frankly would have never been given credit,” he said.

Fearless Steps is the latest in a long line of UT Dallas’ contributions to NASA. Scientists from the university’s precursor institution trained astronauts to identify lunar geology, designed instruments that flew to the moon, and tested moon rock samples once spaceships returned home.

So enmeshed was the U.S. space program in the creation of UT Dallas that some have said without Apollo 11, the university would not exist today.

HEROES BEHIND THE HEROES

It is no coincidence that UT Dallas’ founding 50 years ago aligns with the first manned mission to the moon.

Founders of the Southwest Center for Advanced Studies—which eventually became UT Dallas—attracted scholars and scientists to the region by offering studies in space science.

To protect more vulnerable study areas, the founders decided in 1969 to donate the school to UT Systems, said Rod Heelis, a space scientist who joined the university to study the earth’s upper atmosphere in 1973.

“Had all the [space science] research endeavors failed financially, [the center] may have folded up before the founders decided to make the donation,” Heelis said.

It is a testament to the legacy of those early researchers that space science continues to thrive at the university half a century later, Heelis said.

At The William B. Hanson Center for Space Sciences, faculty and doctoral students focus on researching different levels of the earth’s atmosphere. That program has doubled in size over the past 15 years, Heelis said.

UT Dallas was once again linked with NASA when, in 2012, Hansen and a team of engineering students set out to study team dynamics between the people responsible for putting a man on the moon.

“We wanted to understand: If people are sitting around talking amongst each other, can we capture the audio for each individual and see how a problem is solved?” he said.

When Hansen first approached the public affairs office at the Johnson Space Center in Houston, audio engineer Greg Wiseman said he was more than willing to hand over the priceless Apollo tapes.

Turns out, NASA had wanted for years to digitize the more obscure Apollo audio known as “backroom loops” but lacked the funding and manpower, Wiseman said.

“This is the stuff that no one had heard since 1969—to me, it was historical gold,” he said.

But the project was not all smooth sailing. Hansen encountered his first major obstacle shortly after arriving in Houston.

“We headed down to NASA with the expectation they were going to hand us a box of hard discs to digitize,” he said. “Instead, they pointed us to an analog playback system called the Soundscriber.”

Designed in the ’60s, the Soundscriber pulls only one channel of audio at a time. With hundreds of tapes to pull, Hansen realized it would take 172 years to digitize Apollo 11 alone.

Expediting the process would mean inventing a new playback system. Hansen and two students spent a year designing the 30-track read head, which cut the digitization process to four months.

To attach the 30-track read head, Hansen had to rewire the Soundscriber, a task which carried considerable risk.

“This was unnerving because this [the Soundscriber] is the only machine that can play these tapes back,” Hansen said. “Failure was not an option.”

Hansen then enlisted the help of bioengineering student Tuan Nguyen to digitize the audio.

Once the audio was digitized, Hansen and his students found that analyzing the antiquated tapes would require yet another invention. More than 300 speakers were featured and many of the audio loops were overlapping, so an algorithm was developed to organize the audio.

During Apollo 11, NASA personnel emotion changed based on the event, the team found. While viewing earth from space, the astronauts’ sentiments were positive. When they encountered a technical issue or were forced to make a difficult maneuver, their sentiment became negative.

It was during this phase that Hansen’s appreciation grew for the lesser-known players.

“The heroes behind the heroes represent the countless engineers, scientists and specialists who brought their STEM-based experience together collectively to ensure the success of the Apollo program,” he said.

Once approved by NASA, the audio was published online. It has since been used in a film by CNN and is part of a tour at the Johnson Space Center.

“We knew while we were working on this project that there were challenges to overcome, but at the end we would be involved in a project that released the rest of the story of man landing on the moon.” Wiseman said.

Before Fearless Steps, less than 5% of Apollo audio was available to the public. Now, anyone with Wi-Fi can hear all of Apollo 11 as well as most of Apollo 1, 13 and Gemini 8.

Nearly 88,000 hours of Apollo program tapes are still in analog form, including some of the tense backroom audio from Apollo 13—the “Houston, we have a problem” mission that was aborted after an oxygen tank exploded.

“We would be really interested in pulling Hansen back in to finish the rest of this,” Wiseman said.

An educator at heart, Hansen said he is proud of how the technology advances understanding of science, technology, engineering and math-based learning.

Beginning in September, Hansen’s engineering team will begin a three-year project that involves using the software to analyze how STEM teams work together. The project will study students at UT Dallas as well as at the University of Kansas.