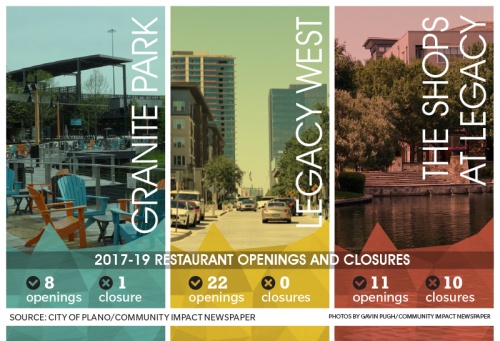 A surge of Plano restaurant openings has provided a host of options for diners and an increase in competition, but some businesses are finding the need to reinvent themselves to survive.

Legacy West has become home to more than 20 unique restaurants and bars since its opening in 2017. And that total does not include the dozens of food and drink stalls at the three-story, European-style Legacy Hall on the north side of the development. During that same period, The Shops at Legacy across the Dallas North Tollway saw 10 notable restaurant closures. It had zero closures in 2016, according to city records.

The landscape in this part of Plano has seen a substantial shift as dining options become the main traffic generators for these so-called destination developments. The good news for patrons is there are plenty of unique choices. Restaurants, meanwhile, find they have to not only stay fresh for customers but also watch out for higher rent rates, competition from nearby cities and a smaller pool of service industry workers that could cut into their success.

“You have to look at the reality that people would want to go see a newer, shinier … most-happening place,” said Fehmi Karahan, who has seen the changes firsthand as president and CEO of Karahan Companies, which developed both properties. “That means that it’s taking business away from some other areas.”

The growth in competition shows no signs of slowing, said Jerry Walker, the executive director of the Greater Dallas Restaurant Association.

“Our industry is still growing in double digits and will continue to do that over the next five years,” Walker said.

The Shops at Legacy debuted as a regional food and shopping destination in 2002 when the Legacy West area was nothing but open fields.

“Though we were the first, we don’t rest on our laurels,” said Jason Kasal, the vice president of leasing for The Shops at Legacy, by email. “You will continue to see change, growth and trends that emerge first here and defying other trends you may see regionally.”

Although The Shops at Legacy saw an uptick in the number of closures after the unveiling of Legacy West, it also signed more restaurant tenants to fill in the vacancies. A total of 11 new restaurants opened at The Shops at Legacy in the same time span. They include The Keeper, Shumi Japanese Cuisine, and Cafe Intermezzo.

The Shops at Legacy has also found success in attracting more retail establishments, such as the recently unveiled TravisMathew, Dallas Running Company and the soon-to-open Madison Reed Color Bar salon. The management team is also keeping an eye out for potential future tenants.

“Because space is limited along Legacy Drive and Bishop Road in The Shops at Legacy, we are being very selective with future retail or restaurant occupants,” Kasal said.

More than 700 new food establishments opened throughout the city from 2017-19, according to city records. Those numbers include any business or service that would be required to apply for a food permit, such as convenience stores, food trucks and caterers. Still, Walker said, there is room for more.

“[The market]  is not saturated yet,” he said. “It’s much more competitive with a whole lot more choices.”

Since 2017, nearby Granite Park along the Dallas North Tollway has welcomed eight new restaurants at its boardwalk-style development.

This and other developments combined have helped send North Texas property values soaring. At the same time, rent rates at those developments may come at too high a price for some business owners, Walker said.

“A restaurant really has to stay between 8-12% of their gross sales to [meet]  their rent,” Walker said. “You’re starting to see rents now go above 12-17%, which is starting to add to how much more difficult it is for restaurateurs to make a profit.”


A chance to reinvent

At the same time, the customer base is expanding with the thousands of employees who have relocated to major corporate offices in the Legacy area.

“When you get a major corporation move-in like Toyota—oh my goodness—that’s a game changer,” Walker said. “When you put that [many people]  out in that central core, it helps all three time slots for us: breakfast, lunch and dinner.”

Some of the older businesses are choosing to take the opportunity to redefine themselves, Walker said.

Examples of some of those healthier restaurants include Original ChopShop and Bellagreen, which both opened last year at The Shops at Legacy.

Karahan told Plano City Council at a March 25 meeting that there is no question that Legacy West has affected tenants at The Shops at Legacy. He counted off the closures one by one: “If you care to drive The Shops at Legacy: Jasper’s closed, Naan closed, Gordon Biersch closed, Twisted Root closed. … There’s not enough retailers in today’s world to fill all these places,” he said.

But The Shops at Legacy is prepared to continue adapting to the needs of its guests, Kasal said.

“We are focused on providing an engaging destination to shop and dine with relevant brands around a social component that can’t be duplicated elsewhere,” Kasal said.

Will Hendrickson, senior managing director of Granite Properties Dallas, said in a written statement the property’s boardwalk development was a response to demand.

“Plano is ... one of the best growth stories in the country, and we feel that The Boardwalk serves as a unique destination for the surrounding communities as well as an amenity for our customers at Granite Park,” Hendrickson said.
SHARE THIS STORY