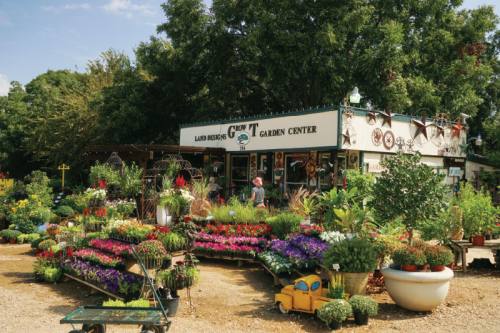 The Flesher brothers purchased their Coppell retail location in 2008.

The familiar story of businesses born in garages has almost become an entrepreneur’s rite of passage. Brother duo Don and David Flesher were no exception when they launched their landscaping company, Grow It Land Designs, in the late ‘90s.

“We had an old man neighbor in Garland, where we started the company out of my garage,” Don said. “He said, ‘If I were a young guy, I’d start this company and just go.’”

Starting with multifamily landscaping maintenance, the Fleshers soon expanded Grow It Land Designs to include commercial and residential landscaping. Between its landscaping services and Coppell-based retail storefront, the company now has more than 40 employees.

The Fleshers purchased their retail location in Coppell in 2008. After a massive overhaul of the facility, Don said the storefront has been a big attraction for customers.

Lush flowers and foliage line Grow It Land Designs’ front yard, and large metal sculptures and waterfall features decorate the back. While the Fleshers bring in revenue from selling plants and yard art from their retail location, their landscaping services are a mainstay of their business.

“The landscape division has become one of our best divisions,” David said. “We have a unique look, and our guys take pride in every job they do.”

And between David’s background in running small businesses and Don’s experience in horticultural design, the brothers each run their own respective parts of the company.

The Fleshers believe in giving back to the Coppell community by providing scholarships to students.