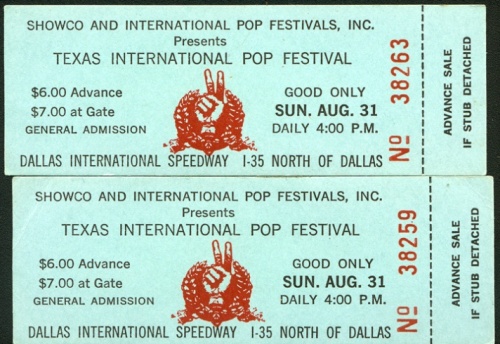 The festival featured performers such as Led Zeppelin and B.B. King.

In 1969 an estimated 120,000 people traveled to Lewisville to attend The Texas International Pop Festival also known as Texas' version of Woodstock.

The Labor Day weekend event included three days of entertainment at the former Dallas International Motor Speedway and a smaller free stage on the shores of Lewisville Lake.

Now, 50 years later, the city is planning to recreate the festival with a two-day event planned for Aug. 31 and Sept. 1 at the Lake Park Golf Course driving range. It will be a ticketed event with two alternating stages of live entertainment.

In March, council approved $100,000 for a service agreement with Live Nation with the goal of the talent-booking company to book at least one band or performer that was part of the original 1969 festival.

Council also approved in March a supplemental amount of $1.25 million to cover the entire estimated cost of the event. The funds will come from the city's hotel fund reserve.

To help celebrate the anniversary, the city is inviting individuals to come and share their stories from the festival on April 30 at 7 p.m. at the MCL Grand Theater, 100 N. Charles St., Lewisville. The stories will then be turned into a documentary.

No registration is required, but attendees are asked to RSVP by calling Community Outreach Specialist Kent Boring at 972-219-3740 or by email at [email protected].