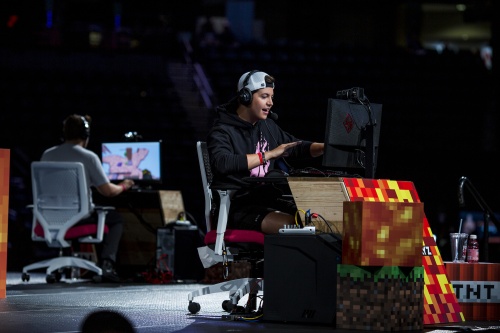 Popular gamer known as PrestonPlayz took part in a esports tournament at the Dr Pepper Arena benefitting the National Breast Cancer Foundation based in Frisco.

“With all the activity we have here in this area around esports, [North Texas] is a major hub for esports with several major professional esports teams located here and the [esports] arena opening in Arlington,” NBCF President and COO Kevin Hail said. “We should be really involved with this because this is the future of entertainment and there’s a lot of philanthropic opportunity and a chance for us to reach this next generation.”

NBCF created Game Pink to bring together gamers, streamers, game developers and publishers on a mission to help women and families impacted by breast cancer.

Game Pink held its first fundraising event Oct. 28 at the Dr Pepper Arena in Frisco, bringing together some of the biggest gamers on Youtube to play a Minecraft tournament to raise money for NBCF while also live streaming the event.

More than 2,000 people attended the event, and it has nearly 700,000 views online through different streaming services. The goal was to raise $500,000 and to date, NBCF has raised $471,000 with donations still coming in from the live stream.

“The event was wonderful; it’s very challenging to do anything new so we had a lot of learning from it,” Hail said. “It was really complex and time-consuming but deeply rewarding...I mean how else do you get half a million to 1 million or 2 million views to get access to the young people in this next generation.”

Hail explained that Game Pink is an opportunity to reach out to the younger generation and make them aware of breast cancer and the importance of early detection.

Creating Game Pink and hosting the event has been a catalyst for NBCF to form new relationships with different companies such as gaming retail giant GameStop, one of the presenting sponsors for the tournament.

“One of the goals we have is that there are companies that maybe wouldn’t necessarily partner with [NBCF] but they would partner with us from a gaming event perspective, and it would be a nice perk for them that it’s also breast cancer awareness,” Hail said.

Other nonprofit organizations that have shown interest in fundraising through esports have been the Make-A-Wish Foundation, Boy & Girls Club and Kickstart Kids, some of which had representatives present during NBCF’s event.

“We’ve talked to them, they’re all interested and they attended the event; and from NBCF’s perspective we always feel that rising tides raise all boats,” Hail said. “We don’t want to hoard what we’ve learned, we think everybody should be involved in this space and this could be a really wonderful frontier for charities in the future.”

Hail said NBCF is currently planning another esports fundraising event for next year that will be centered around the popular game Fortnite.