HISTORY: Carverdale School remembered for excellence in the Cy-Fair community 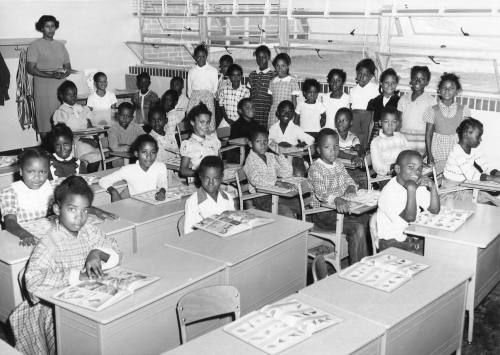 Carverdale School served African-American students in the Cy-Fair area from 1925-1967.

Carverdale—the Cy-Fair ISD school that once served as a school for African-American students before desegregation—started out as a one-room Tanner Road farmhouse donated in 1925 by a German dairy farmer.

The site initially served as both the Greater Macedonia Baptist Church and the first school for students living in the Carverdale community.

Fairbanks Colored School was moved to Dancy Road the following year in 1926, where it served 19 students in first through sixth grades. Lacy Houston and Melissa Depot taught in the school’s first and second years, respectively. Clara Scott would serve as the sole teacher from 1928-1951.

By 1956, the school evolved to serve grades 1-12, and was renamed to Carverdale School. Under the leadership of Principal W.M. Batts, the school board approved a land purchase to expand the campus to 25 acres.

A new wing offered a home economics department, an auto mechanics shop, a science lab and later a gymnasium. Along with Bane and Lamkin elementary schools, Carverdale was one of three CFISD schools to utilize an open-concept model.


Coach Tommy Johnson recruited basketball players such as Robert Santee from Houston to play for the Carverdale team. Santee helped the Carverdale Cobras clench two consecutive state titles in 1965 and 1966.

Santee was later drafted by the Houston Astros, but he said his best memory was being named to the Prairie View Interscholastic League Hall of Fame for his time at Carverdale.

“Probably ’63 to ’66 was the best memories I ever had in life because, when I arrived at Carverdale, they didn’t have anything in the trophy case,” Santee said. “The Astros was just something I did, but high school is what I think about from time to time.”

By the time the U.S. Department of Justice mandated desegregation in 1967, 800 students were enrolled at Carverdale. After the school board voted to close the school on Aug. 3, 1970, the Houston Community College System used the campus for several years. It has since been demolished, and the area is now home to industrial warehouses.

Santee, who still lives in the Houston area, said he continues to encourage students to work hard toward their goals like he did during his time at Carverdale. On Feb. 13, he received a proclamation from Mayor Sylvester Turner’s office honoring him for his work with at-risk youth.

“I work with troubled kids because I went through some trouble,” he said. “I tell my grandkids, ‘Whatever you participate in, be the best you can be in it. If you feel you’re the best in something, don’t ever let them take that from you.’”