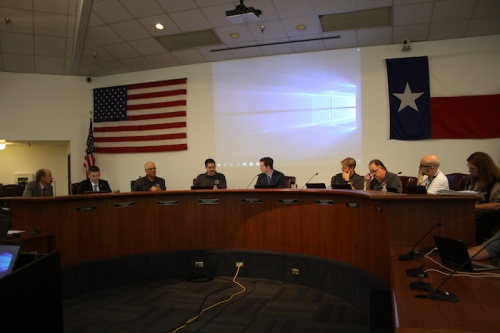 Jersey Village City Council adopted its budget for the upcoming fiscal year at a Sept. 16 meeting.

After years of budget surpluses in Jersey Village, the city is poised to spend more than it brings in for the second year in a row as work continues on several major capital projects and flood mitigation efforts.

The Jersey Village City Council unanimously adopted a city budget for fiscal year 2019-20 at a Sept. 16 meeting, with projected expenditures outpacing revenues by roughly $4 million—a gap that will be filled by city reserves.

Jersey Village Mayor Andrew Mitcham said the spending gap was planned and makes use of excess reserves built up from past budget surpluses. Data presented at the meeting showed general fund revenue has outpaced expenditures for each fiscal year from 2011 through 2018 before this year's budget—which runs through Sept. 30, 2020—saw expenditures come out on top.

"We’ve drawn quite the surplus over the last few years, and now it’s time for the city to start spending that down," Mitcham said. "That’s by design. I’m looking forward to all the projects that will continue to make this place such a great place to live." City Manager Austin Bleess said the biggest budget goal involves continuing to work on flood mitigation efforts laid out in a flood recovery plan adopted by the city in 2017.

The budget sets aside $1.4 million for channel improvements to part of White Oak Bayou and $600,000 to help support home elevation. The city expects to receive grant funding for many projects, including a project to build an earthen barrier around the Jersey Meadow Golf Course and improve drainage in the Wall Street corridor.

The city has already received around $1.8 million in grant funds for the project and expects to receive another $3.7 million once the Federal Emergency Management Agency approves the project's design, Bleess said. Together, the two grants would fund the entire project, he said.

Bleess said the city is looking at applying for home elevation grant funding for up to 30 homes in the coming year, or roughly $7 million-$8 million in grants.

Other budget goals include starting construction on a new City Hall and increasing starting pay to $15 per hour for all full-time employees. Work on a new convention center at Jersey Meadow—initially estimated to cost $3.6 million—has been placed on hold as the city evaluates its options moving forward, Bleess said.

Council also voted to keep the city's property tax rate the same as last year at the Sept. 16 meeting—$0.7425 per $100 in valuation. However, because the Council increased the city's homestead exemptions earlier this year, the city expects to raise less revenue—about $290,000 less—from property taxes in FY 2019-20.

Overall revenue is still expected to rise between FY 2018-19 and FY 2019-20, according to city projections, with sales tax revenue making up a larger piece of the pie.

"We’re doing a lot to shrink that gap and make it a little more even across all the sources of revenue, lessening the burden on property taxes as well," Bleess said.

As of Aug. 31, the city is projecting to bring in about $17 million in revenue by the end of the current fiscal year—about $900,000 more than expected when the budget was adopted last year. Sales tax revenue is projected to finish about $712,000 ahead of the budget.