TxDOT to move forward with construction on sound wall along parts of Hwy. 290 in Jersey Village 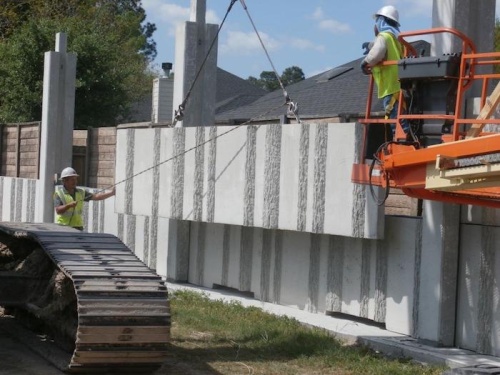 Crews work on a sound wall near the Cypress Mill Estates subdivision in 2017. Construction has not yet begun on the sound wall in Jersey Village.

Plans for a long-awaited sound wall along a portion of Hwy. 290 in Jersey Village took a step forward June 17.

The Jersey Village City Council unanimously voted to approve a memorandum of understanding with the Texas Department of Transportation for the construction of the 16-foot wall at its June 17 meeting.

The wall would extend from south of Lakeview Drive—where the homes end and the parking lot for Jersey Village City Hall starts, City Manager Austin Bleess said during the meeting—past the ends of Congo and Singapore lanes and down Seattle Street to Senate Avenue, according to the meeting packet.

TxDOT first proposed building a sound wall in August 2013. The wall was meant to be completed as part of the Hwy. 290 construction, but it became a separate project when TxDOT was unable to meet the deadlines to do a change order for the initial project, per the agenda.

Community Impact Newspaper has reached out to TxDOT for information on the wall’s construction timeline and will update this article as it becomes available.

Bleess said during the meeting that the city is working with TxDOT to see if the wall can be extended to homes west of Jersey Drive, but “it’s not looking completely favorable” at the moment, he said.

Sound walls cannot cost more than $25,000 per receiver—a home or business—to be deemed necessary, according to guidelines enforced by the Federal Highway Administration. It is unclear what the project will cost as of the publication of this article, but TxDOT will pay for all design and construction costs, Bleess said.

Sound walls are considered most effective within 200 feet of a highway, usually the first row of homes, per the FHWA. Effective noise barriers typically reduce noise levels by 5 to 10 decibels, which can reduce traffic noise levels by as much as one half.

As part of the approved memorandum, the city will provide all necessary legal rights for the wall’s construction and assume all responsibility for costs associated with right of way acquisition, utility adjustments and coordination. Much of this has already occurred, per the agenda.

Any additional work that may become necessary will be subject to the approval of TxDOT. Upon completion of the wall, the city will own the wall and be responsible for its maintenance.

Bleess was unable to provide an estimate for maintenance costs at the meeting. However, he said he did not anticipate costs being high, as most maintenance costs would come from circumstantial events like covering up graffiti or repairing damage from a motorist colliding with the wall during an accident.

Bleess also said that, according to TxDOT, the structure would need to be replaced in 25 to 30 years. It is unclear whether the state or the city would be responsible for replacement costs, he said.