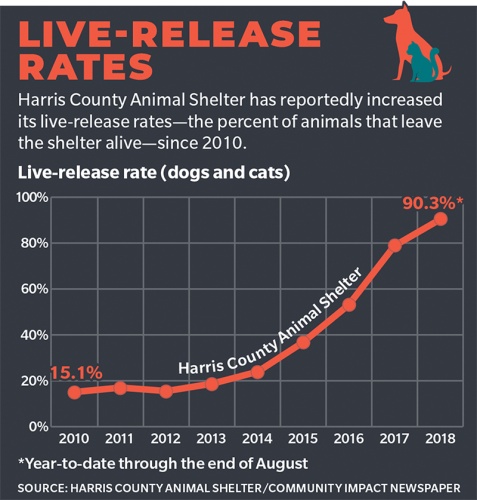 Over the past decade, the Harris County Animal Shelter has decreased its euthanasia rates through programs and partnerships with rescue groups and other nonprofits.

From 2010-17, the county facility increased its live-release rate—or the percent of animals that leave the shelter alive—from 15.1 to 78.8 percent. Additionally, Michael White, Harris County Veterinary Public Health Division director, said the shelter’s 2018 live-release rate through the end of August was 90.3 percent.

Despite these improvements, officials said more needs to be done to control the Greater Houston area’s stray animal population. As the county facility is consistently overcapacity, the shelter is forced to house animals together, exposing them to potential health problems.

“We try to do everything we can to not put an animal down,” White said. “But when you have so many animals confined in a small space, you have a larger chance of disease spreading.”

In addition to planning to open a new, larger facility next year, the Harris County Animal Shelter is also relying more on local nonprofits to help care for the homeless animal population.

One of those Cy-Fair area partners is Loving Arms Pet Placement. Director Joanne Smith said the group became an official partner of the Harris County Animal Shelter about a year ago.

“We know that the county has strived to partner with rescue groups, routinely transports dogs and cats to other cities where populations are much lower and has improved outreach to both owners and potential fosters,” Smith said.

When the Harris County Animal Shelter was built in 1986 in north Houston, it was designed to handle 12,000 animals annually, but last year the shelter handled more than 18,000 animals.

To address capacity issues, the county is opening a larger animal shelter behind its existing location in late 2019—four years after voters approved a $24 million bond referendum in 2015. White said preconstruction work at the site has delayed the opening of the new facility.

To make up for the lack of space, the shelter is often forced to house four or five dogs together in one kennel, he said.

“To me, [housing that many dogs together] is totally unacceptable, but the only alternative we have is to euthanize,” White said.

Jennifer Hennessey, owner of Animal ER of Northwest Houston in Cypress, said overcrowding in shelters can create major health hazards for the animals.

“The biggest problem with overcrowding is that upper respiratory diseases are going to run rampant just because the vaccination background is questionable,” she said.

While waiting for the expansion project to be completed, Harris County Animal Shelter officials have also focused on implementing programs and developing partnerships to increase its live-release rates in recent years.

White said a trap-neuter-return program—the process of humanely trapping, neutering, vaccinating, removing the ear tip and returning cats to their original locations—has been instrumental in increasing the live-release rate of cats from the facility.

“Prior to [the program] there was hardly any way to get cats out of here alive,” he said. “People just don’t adopt cats very often.”

Additionally, the animal shelter has increased its work with rescue and foster groups, which help animals get adopted faster, White said.

“People think [animals] can survive on their own, and so if they don’t want [an animal], they just dump it somewhere,” Director of Development Suzanne Zutter said.

At the Animal ER of Northwest Houston, Hennessey said four to five stray animals are brought in each week—mostly from surrounding neighborhoods.

If the owner cannot be located via a microchip or social media, the clinic can provide a kennel and food to help those willing to foster a pet. Hennessey said since 2014, 100 percent of stray animals have either been returned to their owners or taken in to a foster home, which often becomes a permanent home.

“I’d say the most helpful thing is fostering,” she said. “We just need that animal to have a livelihood, but exposing them to fostering is so much better than a shelter situation because they learn commands [and] social things that help set them up to be more successful in long-term companionships.”

Cindy Lowery, who serves on the board of directors for Cypress Lucky Mutt Rescue, said the majority of dogs that come through are surrendered by their owners, and the group struggles to keep up with numerous daily requests for help. The abandoned dog population in the area has grown increasingly worse over time—especially in the last six months to a year—she said.

While the group saw an uptick in homeless pets in the aftermath of Hurricane Harvey, Lowery said ultimately, there are more substantial factors contributing to the issue locally.

“It’s honestly just the people around here that aren’t holding on to their dogs—they’re just wanting to give up and have somebody else take them in,” she said. “Sometimes, it’s just, ‘We’re moving to another house,’ or ‘We had a baby.’ It’s definitely been so much worse.”

At any given time, the organization has 20-30 volunteers fostering dogs and puppies waiting to be adopted. The organization holds adoption events every Saturday at PetSmart off Hwy. 290 and Pet Supermarket on Fairfield Village Drive. Pets are also posted on the Petfinder website and on the organization’s Facebook page.

Overcrowding in shelters can partially be attributed to the fact that Texas has no spay-neuter laws, Lowery said. While many Houston-area shelters are overcapacity, she said a lot of their rescues are transported out of state where there are no shelters and residents are waiting for dogs to adopt.

“We do take calls from shelters—we try to help Montgomery County or Harris County Animal Shelter,” she said. “We have volunteers that work there that contact us to say, ‘This dog has one more day [to live]. Can you help us?’”

When Cy-Fair residents find abandoned pets, Lowery said they should first check for microchips to attempt to locate the owners. Posting “lost dog” signs in neighborhoods or posting to community Facebook groups can help as well, but ultimately, she said she believes more people need to be willing to commit to short-term fostering.

“So many dogs are dumped out in Fairfield,” she said. “I had four puppies dumped on [the Grand Parkway] and Cypresswood [Drive] earlier in the week, and no one will step up and help us. We’re begging for fosters so we can help these puppies.”

Loving Arms takes in about 250 dogs and cats each year and has about 150 animals in its care at any given time. Each animal is spayed or neutered, vaccinated and microchipped.

Smith said Cy-Fair residents considering permanent adoption should ensure they are ready for a long-term commitment.

“Many people acquire a dog or cat on impulse without researching the breed or taking into consideration their lifestyle, housing arrangements or financial ability,” she said. “A pet is a 15-year commitment.”