Behind the story: Opioid abuse in Spring, Klein 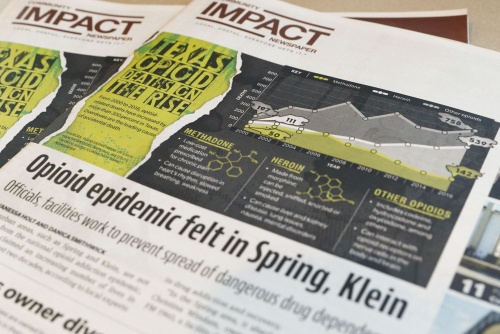 The story explains the local effects of the national opioid crisis, focusing on the two communities we cover in unincorporated Harris County.

Editor’s note: This piece is part of Community Impact Newspaper’s participation in the Trusting News project, a collaboration of newsrooms across the country that is spearheaded by the Donald W. Reynolds Journalism Institute at the University of Missouri. During an era in which distrust in news organizations is an apparent problem and misinformation spreads swiftly, the goal of the Trusting News project is to better explain journalistic processes to the public in an attempt to regain that trust.

Writers at the Spring-Klein edition of Community Impact Newspaper decided in December to pursue a story that a sister publication had previously covered with an eye on the unique circumstances in our own market. The story explains the local effects of the national opioid crisis, focusing on the two communities we cover in unincorporated Harris County.

This is a complicated issue that has garnered a great deal of media attention in recent years. Because of the potential for sensationalism in coverage, we wanted to learn from experts how the issue applies to the Greater Houston area, especially our coverage area in Spring and Klein. The opioid crisis may be nationwide, but each region is different, and we could not assume that it unfolded the same way in Spring and Klein as it does in other parts of the country.

The first thing that we look for in any story is factual information. By sifting through data from official sources, we can get an unbiased set of information and then talk to experts to interpret that data. Some of the information that we were hoping to obtain—such as the number of arrests for opioid possession in our area—was not available at the level of specificity we were hoping for, which presented some challenges.

The Harris County Precinct 4 constable’s office does not track opioid possession as a separate item, but it tracks the number of arrests for possession of cocaine/opium. While not as specific as we hoped, the information is a helpful measurement that we charted and included with our story. The most telling set of data that we gathered was a spike in the number of arrests in Precinct 4 for possession of synthetic narcotics. This confirms what experts from several Texas universities told us—that synthetic narcotic use has increased in the past two years.

We also did not want to mislead readers into thinking their children were at a high level of risk or that drug abuse is spreading on our public school campuses if that is not the case, so we reached out to the area’s ISD police departments to learn whether opioid abuse is a focus for their current enforcement efforts. We learned that while it is on their radar, abuse is not considered rampant on the campuses, and police efforts focus on prevention and education.

We also wanted to talk to the people who work with addicts on a daily basis—local treatment centers and education programs. The owners of these facilities that we talked to indicated that the problem is huge but that it cuts across all socio-economic levels. They provided valuable insight on what it is like to be a recovering addict or to work with them.

Each person who we spoke with contributed a different perspective, or angle, which we tried to fit into the puzzle to present a balanced view of the opioid problem. People working with addicts every day could report on the immediate, emotional urgency of recovering from opioid abuse. Health experts warned of the dangers of overprescribing narcotics and the challenges faced in areas where there is little public funding for addiction health care. School district police reported that they are not seeing signs of opioid abuse on campus, while academic experts described national and statewide studies that showed addicts turning to substances other than those widely reported on in the media.

There are likely additional sources that could have given us even more perspectives on the ground in Spring and Klein, so we always strive to do better and to find all of the key information in a story. We regularly revisit topics that we cover to include the latest information as it becomes available.

By explaining our process and how we attempt to present a balanced picture, while listening carefully to reader feedback, we hope to gain the trust of our readership.

Reporting is provided as part of Community Impact Newspaper’s partnership with the Trusting News Project.