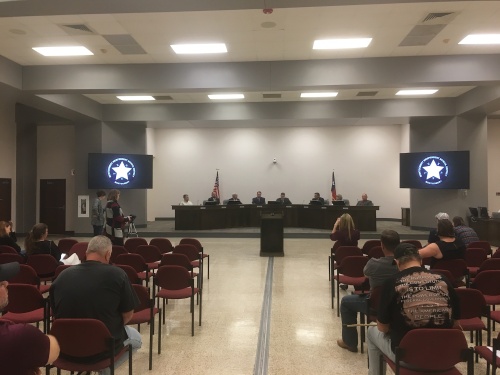 The Montgomery ISD board of trustees delivered a statement around 11 p.m. Oct 15.

Updated 9 a.m. Oct. 17: This story originally said the MISD board of trustees met Oct. 1 to discuss the incident. It has been updated to say the board was notified of the incident Oct. 1.

This story refers to the incident as an "alleged hazing incident" to be consistent with phrasing delivered by the Montgomery County Sheriff's Office and Montgomery ISD. Details of the incident have not and will not be released, school officials said.

Montgomery ISD has concluded its investigation of the alleged hazing incident involving Montgomery High School football students. All necessary disciplinary actions have been taken, but details will not be released, according to the district.

The MISD board of trustees delivered a prepared statement at a regular board meeting Oct. 15.

"The board understands that the public wants and deserves answers. Unfortunately due to … [privacy] laws, we can’t divulge any information that would identify specific students or the punishments they may have received," board member Jim Dossey said, reading aloud the statement. "At this point, all necessary student punishments have been administered."

The campus investigation has drawn widespread concern and speculation across the community. Several parents and residents voiced concern over what they call a "culture of hazing" at MISD. Others expressed frustration at the lack of communication and answers from the district.

"I ask that you at least communicate with us, because it is very frustrating not to know what's going on," Jeanne Poulton, a mother of an MISD football student not involved in the incident, said at the Oct. 15 meeting. "[The rumors are] ... very frustrating. The rumors are probably the most nerve-wracking thing."

Details of the incident, such as how many students were involved and the nature of the conduct, have not and will not be released, according to the district.

On Sept. 27, the MISD administration received an anonymous report through its hotline after school hours over a possible hazing incident involving MISD students, Dossey said at the Oct. 15 meeting.

"The district's investigation revealed that prior to the Sept. 27 report, no district employee or administrator had received a report of the type of conduct alleged to have occurred in the situation," Dossey said.

On Oct. 7, MISD announced that Montgomery High School’s home varsity football game scheduled for Oct. 11 was to be forfeited. This decision was reached because the district's views hazing perpetrators as those who engage in conduct as well as have knowledge of the incident and fail to report it, and to emphasize the district's zero-tolerance policy of hazing, Dossey said Oct. 15.

The Montgomery Sheriff's Office executed a search warrant Oct. 11, seizing cell phones for examination of the rumored video, according to a news release from the sheriff's office.

On Oct. 11, Montgomery County District Attorney Brett Ligon recused himself from the investigation "based on personal relationships" between himself and persons involved in the investigation, according to a news release from the district attorney's office.

MISD held a special meeting Oct. 11 at 8 a.m. regarding the incident. The board of trustees deliberated for nearly two hours in closed session before returning to open session and stating they would not be commenting on the incident until the next board meeting Oct. 15.

"At this point, we're going to hold off on further discussion. ... So this meeting is adjourned," Dossey said.

Parents and community members who were present at the meeting expressed concern and outrage over the announcement, saying they were expecting the board to provide answers.

At the Oct. 15 regular board meeting, the board of trustees went into closed session for about two hours.

The board then approved and delivered a public statement, which stated all necessary disciplinary actions have been taken.

At the Oct. 15 meeting and prior to when the board went into closed session, parents and residents expressed concern over how the investigation was being handled as well as how the incident resulted in the first place. In accordance with the Texas Open Meetings Act, the board of trustees was not legally allowed to respond to public comments.

MISD parent Diane May addressed the board and said she has seen multiple posts on social media from parents who allegedly said their child was bullied at MISD, and the perpetrators received no consequences. May said she believes there is a culture of bullying at the district.

"I also was really impacted by reading the countless comments [on online platforms] regarding the culture ... [in our community]," May said. "I think what has become clear is that this situation that's happening right here in Montgomery right now [implies] ... a much larger problem."

May continued to say that bullying and hazing can have long-lasting effects on victims, and she said she hopes MISD will provide a better platform for victims to have a voice.

"I really hope the schools and administration can review the current guidelines regarding bullying and hazing and provide education where education is needed, and I mean all the way from students to the top. I hope that we can review reporting procedures," she said. "Finally, I ask the board to examine, address and deconstruct the culture that perpetuates hazing and bullying in our community."

One speaker, Gregory McNelly, shared his thoughts on what he called a "culture of hazing" at the district.

"I want to know, what leadership actions are being taken?" McNelly said. "It's important to consider this is not a single action or a single person; there's a culture in place that allowed this to happen that needs to be addressed from the leadership down."

Poulton said she does not blame the administration for the incident but also feels the district should not have punished the rest of the football team. Poulton recounted an incident where her daughter was physically injured and bullied at MISD.

"By no means did I blame the classroom as a whole, because it's kind of silly to lump everybody into something," she said. "I don't understand how we punish them as a whole."

Poulton said she is concerned her son's future, such as scholarship opportunities, might be jeopardized.

Bill Chilcoat, a former special needs teacher, said he does not blame the district but urged board members to be an advocate for students and to "step up and lead."

"We need to be aggressively accepting our roles as leaders in this community for our school district and setting a standard of holding everyone that works for you [accountable]," he said. "We need to make sure that everything is getting done properly [and we are] communicating efficiently and effectively."