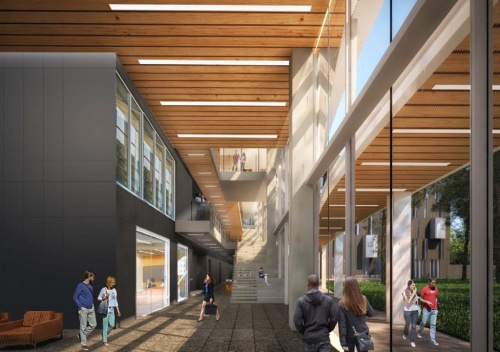 Grand Central Park has been confirmed as the location of Sam Houston State University's proposed college of osteopathic medicine.

Sam Houston State University's proposed college of osteopathic medicine is one step closure to becoming a reality, as it reached another level in the accreditation process. Osteopathic medicine uses hands-on diagnosis and treatment through a system known as osteopathic manipulative medicine, according to the American Association of Colleges of Osteopathic Medicine.

According to the AOA, receiving candidate status is the second stage hopeful colleges of osteopathic medicine must meet when seeking accreditation from the COCA. Candidate status may be granted to colleges that demonstrate the planning and resources necessary to be expected to move onto pre-accreditation status within two years.

In a phone interview Feb. 19, Charles Henley, dean of the new college of osteopathic medicine, said being granted candidacy status is a big milestone for the proposed college.

"We have reached candidacy status, which means that if we just keep doing what we’re doing, we’ll eventually get to the point where we can accept students and start instruction," Henley said.

The $65 million college is currently under construction on 7.3 acres in Conroe’s Grand Central Park; the 108,000-square-foot facility is scheduled to be substantially complete by Dec. 31, Henley said.

The five-year plan for the college also includes a second 108,000-square-foot building, which would include space for an on-site clinic, an allied health program, labs, medical offices and a simulation center, Henley said. Until then, SHSU intends to lease space in Conroe to open a clinic where future students and hired physicians can practice medicine, Henley said.

"It's hard to recruit physicians unless you can offer them a place to practice medicine, because it requires an awful lot of training to get certification and practice their speciality," Henley said. "So if you’d like to hire a physician to be part of an academic program or medical school, they want to maintain their medical skills, so you have to have a place for them to practice and also have students rotate through there."

If approved, the first class of 75 students could begin the four-year program as early as August 2020, Henley said. Moreover, students will spend the first two years of instruction in the classroom, while the next two years will include rotations in local hospitals.

"Our mission for the medical school is to focus on East Texas and try to change the health care workforce in East Texas with an emphasis on access to primary care," he said. "East Texas is primarily a rural [area], so we’re looking at more rural and underserved communities we want to support. So our partner hospitals are in Nacogdoches and Beaumont and places like that."