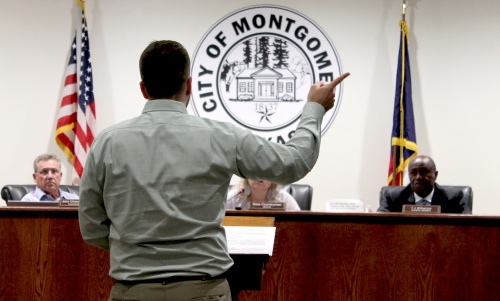 The Montgomery City Council adopted its 2019-20 budget and tax rate at a meeting Sept. 10.

At a regular meeting Sept. 10, the Montgomery City Council approved its $4.09 million budget and its tax rate for FY 2019-20. City Administrator Richard Tramm said that of the $72,959 revenue increase, $62,185 will come from revenue raised from new properties.

“The vast majority of that increase came from new properties that were added to the city. You know, vacant land… a lot of commercial properties and residential properties,” Tramm said. “A small portion of that actually came from increased property assessment of existing properties.”

No citizens spoke during the public hearing on the budget and tax rate, and council approved both unanimously.

In other Sept. 10 news, council approved the measure to give itself the power to review exceptions to city zoning ordinances approved by the Board of Adjustment. The board previously had the power to grant exceptions without review or the possibility of repeal.

“I personally think it's in the best interest of the community that the diverse opinion that the council brings to every decision reflects more the community as opposed to a board that may have an axe to grind or may not have a perspective as wide and as varied as the council does,” said Champagne.

Council decided to add a section to the ordinance stating the Planning and Zoning Committee could be consulted at council’s discretion.

Elsewhere, City Engineer Chris Roznovsky presented bids for Phase II of water and drainage improvements on Martin Luther King Jr. Drive. Council approved the $89,317.89 bid from MMG Contractors, LLC. Roznovsky said the contractor offered the lowest bid and completed Phase I of the project and there would be great benefits to maintaining continuity into Phase II.

Mayor Sarah Countryman said she wanted to make sure the work for this long-running project began in a timely manner.

“I don’t think that we’ve maybe asked enough questions or maybe that we’ve just accepted the contractors at face value,” Countryman said. “And we want to make sure, one, they’re worth even the amount we see here and two, that they get the job done in a timely manner because it’s time.”

The next city council meeting is Sept. 24 at 6 p.m. at 101 Old Plantersville Road, Montgomery.