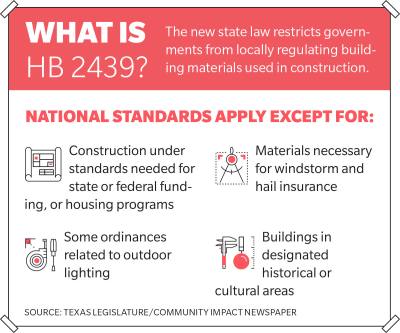 The law received support from most state lawmakers and building industry associations, who said a more open market  for building materials could result in lower construction costs for buyers and builders.

“We just wanted to make sure that Texas and its economy continue to stay vibrant and healthy and that you don’t have local municipalities adding additional standards and regulations to make construction more expensive,” said state Rep. Steve Toth, R-The Woodlands.

The law will not directly modify The Woodlands Township’s development covenants and standards, township officials said, but it could affect new regulations in the future if the township residents decide to incorporate. Meanwhile, the cities of Shenandoah and Oak Ridge North expect some changes to the rules governing building standards within their boundaries.

“You just don’t want to have somebody say, ‘Well I can put this product on here just because of the national building code; it’s allowed,’” Shenandoah City Council Member Ron Raymaker said. “Will that affect our property values long term? I don’t have a crystal ball on that.”

HB 2439 prevents local governments from regulating the materials used for new construction, maintenance and renovations. Instead of localized rules regarding building products and methods, the new law sets nationally accepted codes as the only standards for cities to regulate construction within their boundaries.

Construction industry associations favored the bill and touted its intended effect of simplifying codes—likely resulting in savings for consumers and builders by eliminating restrictions on the construction process.

“When you take some of these tools out of the toolbox for builders, it really starts severely impacting affordability,” said Bradley Pepper, the director of government affairs for the Greater Houston Builders Association. “There’s a region-wide issue with housing affordability. And so something like this that goes to the bottom line of the affordability is what it is targeted to address.”

Based on 2017 U.S. Census Bureau estimates, values of owner-occupied housing units in south Montgomery County were higher than the Texas median of $151,500. Oak Ridge North’s median housing unit value of $192,200 was 27% more than the statewide figure, while The Woodlands’ $351,000 was 132% greater.

Scott Norman, the executive director of the Texas Association of Builders, also said the organization supports HB 2439 and expects the law will result in lower building costs.

“When a city has an entire prohibition or an entire mandate onto the certain type of product that raises the cost, that is going to price out a certain number of people from that community,” Norman said.

Toth, who has a background in contracting, said he believes increased options for builders will pass on savings to consumers.

“At the end of the day, it really doesn’t matter to the builder,” he said. “It’s the customer that ends up paying the bill for these additional requirements and regulations.”

However, Bruce Race, a University of Houston architecture professor with experience in community design, said the new law may not result in true savings on new construction.

“There’s just so many things I would be focused on before I started to look at the $900 I saved between brick and HardiePlank,” Race said, referring to a brand of siding. “One could make the argument, but I’m also wondering if that’s not just $900 that goes into a builder’s pocket and then the family has to tear the siding off in 20 years and do it again.”

Despite the legislative support behind HB 2439, many Texas city governments and civic groups criticized the measure for its effects on their oversight and established visual guidelines within their boundaries.

“You could build a house out of corrugated tin under international building codes, but that’s not appropriate in a 1960s brick, ranch-style neighborhood,” said Bennett Sandlin, executive director of the Texas Municipal League. “Our city officials are just beginning to digest how bad this is, and what a dangerous precedent it sets for keeping the community looking the way you want it to.”

Locally, Oak Ridge North City Council approved a resolution in June requesting Gov. Greg Abbott veto the bill. Prior to passing the resolution, members of the council shared concerns over the law’s future effects on longstanding visual standards in the city.

While the city of Shenandoah declined to comment on HB 2439, members of its City Council requested in June that residents contact the governor’s office to appeal for a veto of the bill.

“I strongly opposed this bill, as it takes away the rights of cities to set their own community standards, to protect their residents, in favor of construction industry interests,” Raymaker said in a September email. “It’s an overreach by the Legislature in my opinion.”

Both Shenandoah and Oak Ridge North officials said their cities have worked to maintain certain visual characteristics within their boundaries throughout south Montgomery County’s continued build-out. Many of Oak Ridge North’s original homes were built in the 1960s and 1970s under deed restrictions requiring a percentage of exterior brick, according to City Building Official John Beisert. Replacement zoning polices adopted in the 1990s maintained those masonry requirements until this year.

Prior to HB 2439, the city’s masonry constraint included most of its residential, business and manufacturing districts. A portion of the city electrical code banning certain types of wire in the city is also unenforceable, which Beisert said may be a safety concern.

Raymaker said Shenandoah kept a masonry standard prior to HB 2439, and the law’s passage could bring visual changes for local buildings under broader national codes. While a drastic immediate effect from the law is unlikely, Raymaker said future properties in Shenandoah could gradually change in appearance as the city’s older homes become redevelopment targets, and they are not encumbered by original visual requirements.

“I think right now the average resident is more concerned about, ‘Yeah, I want a house that blends in with what we have already in the city,” Raymaker said. “Somewhere in the next 30 years somebody’s going to start teardowns in Shenandoah Valley, and then that’s where it’ll get a little more contentious.”

Standards in The Woodlands Township are backed by longstanding covenants designed to maintain founder George Mitchell’s original vision for the community.

If the township votes on a civic incorporation and potentially shifts from the covenants to a different model of aesthetic guidelines in the future, its new system would fall within the restrictions of HB 2439, according to John Powers, the assistant general manager of community services in The Woodlands.

Powers said the covenant system was originally enforced by now-defunct property owner associations that transferred their responsibilities to the township’s standards committees before dissolving. Therefore, The Woodlands itself is not viewed as the entity that would be regulated under HB 2439.

Following a legal review of the law’s effects on local guidelines, The Woodlands Township’s Development Standards Committee determined HB 2439 would not affect the committee or the township.

According to DSC Chairman Walt Lisiewski, if the government and residents decide to incorporate and shift to a different system of visual standards in the future, then the law could influence the new regulations.

Lisiewski said the covenant administration and standards teams would work within their current processes to maintain the norms for residential and commercial buildings in The Woodlands.

Hennie van Rensburg, director of The Woodlands Covenant Administration, said he believes the consistency of local standards enforced by the township remains an appeal to residents and newcomers.

“Most people move here I think because they certainly like the way The Woodlands looks aesthetically and the way the properties are maintained,” van Rensburg said. “They certainly very much appreciate that we have the actual deed restrictions in place to ... help maintain the actual integrity of the community.”

Lisiewski and van Rensburg said ongoing new construction has created a challenge of balancing the look of modern homes and trends with the established visuals of older portions of The Woodlands. Lisiewski said the township design agency remains focused on development in The Woodlands and the hundreds of monthly variance applications it receives intended to preserve the character and principles of the area within the township’s traditional constraints.

“We want to allow a resident to utilize his property and expand on his property, to do things, but we also want to make sure that you take your neighbors into consideration,” Lisiewski said.