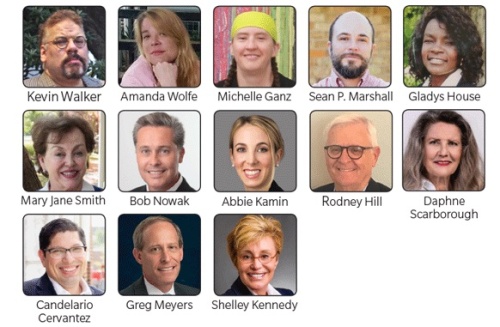 City elections are ramping up in Houston, and candidates vying for Houston City Council’s District C seat, which represents Meyerland, Montrose and the Heights, will not face an incumbent for the first time since 2011.

Mayor Pro Tem Ellen Cohen has reached the end of her term limit, and in the past three elections, District C residents have had no more than five candidates to choose from. Now they will evaluate 13.

The candidates come from different professions and political backgrounds, having served on city commissions, the Houston ISD board of trustees, the Greater Houston Partnership or as city staffers. Others are self-labeled “political outsiders” coming from backgrounds in engineering and academia.


Learn more about the District C Candidates in our Voter Guide.

While entering a race without an incumbent is enticing for a candidate running for any office, political analysts say the District C race could represent a change in course on many key issues, from flooding and infrastructure to public safety.

“It’s really fertile ground where you have the opportunity to address a diverse variety of issues,” said Alim Adatia, a director at Houston-based political consulting firm Outreach Strategists. “The faith communities, the LGBTQ communities and others are all very active in this area. The very core issues in this district affect policymaking at the city level, which gets people engaged.”

The results of Houston’s November election will change the dynamics at City Hall because the city does not stagger its races. All 18 elected city offices are up for election at the same time, meaning the winner of the District C race will enter a different environment than the one Cohen leaves. This is not uncommon in Texas: Dallas, Fort Worth, San Antonio and El Paso do not stagger city elections either.

Incumbent Mayor Sylvester Turner is facing competition from 11 candidates, and if one of them unseats him, they will appoint their own city staff. Out of 16 City Council seats, both at-large and district seats, eight do not have an incumbent, and none of the races are left uncontested.

Winning a district with influential residents benefits a council member trying to collaborate with others.

“All of [the District C council members] have gone on from their respective term to do big things. ... When you draw from a pool of people who are that active in the community, by the time they get to this level, they have a long record of engagement,” he said. “Any mayor is going to look at those people and know they are go-getters.”

To engage with a wide variety of voices, Cohen, who was appointed mayor pro tem in 2016, said she started designating representatives within civic groups to act as liaisons between the residents and the District C office.

“We would ask volunteers, community activists, who would be going to the civic clubs anyway, if one person would  report back to us. ... It’s really kept us in touch with the community,” Cohen said.

“The biggest change is how much politics, which used to be local, have become national,” Stein said.

The combination of political engagement and residents with a higher median income than most of the city results in more campaign spending. After the first filing period in July, District C candidates had already racked up over $300,000 in campaign donations, campaign finance filings stated. While donations do not make-or-break a city election, Adatia said they can help build a voter base.

“If you have a track record and name recognition, all of your money is being put toward engaging with voters, and the more you spend toward engaging them ... the more, in that way, money does matter,” he said.

In many ways, the district looks different than it did eight years ago. In the last eight years, residents have endured the Memorial Day and Tax Day floods, Hurricane Harvey and Tropical Depression Imelda. They also saw the district gain almost 9,000 residents between 2012-17, according to Houston Planning Department data.

Candidates will need to address a number of issues in their campaigns to gain the support of voters with varied interests. Heights residents Eliab Erulkar and Karissa Schecter said they attended a candidate meet and greet hosted by the Greater Heights Association to hear how candidates plan to distinguish themselves.

“You see all these condos and  apartments coming up, and you feel like no one is thinking, ‘Wow, there’s going to be lots of people around, maybe we should have better transportation; better drainage,’” Schecter said. “That’s one issue, and then, of course, there will be more flooding than sewage pipes can handle.”

Erulkar said he is looking for a candidate with a plan to improve bike lanes and implement safety regulations if electric scooter companies come to town. Residents in Meyerland have similar concerns but they have to challenge the presumption that their area is more suburban, said Kay Swint, Secretary of the Greater Meyerland Super Neighborhood.

“A lot of us consider ourselves fairly urban,” she said. “We care about the same things as other areas: walkability, parks, access to METRO and ways to get to the bayou like bike paths.”

“The big issue for Meyerland in general is that District C is so spread out that a lot of the areas closer to downtown get more attention from City Council,” she said.

“Any candidate, regardless of experience, has to show a depth of knowledge,” he said. “The level of activism and the number of issues that will be tested means candidates have to have a really good understanding of the issues that will attract voters.”The Houston City Council District C race has 13 candidates on the ballot.