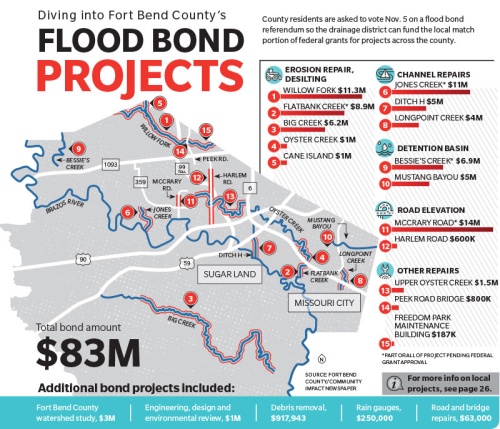 For the first time in about 70 years, Fort Bend County residents will vote in the Nov. 5 election on a bond for the county’s Drainage District totaling $83 million to fund up to 25 flood mitigation and drainage projects, including several in Sugar Land and Missouri City.

The last time a bond referendum was brought to the voters for the drainage district was in the 1950s, when the district was established, said Mark Vogler, the Fort Bend County Drainage District director.

Fort Bend County Judge KP George said none of the projects in the flood bond referendum are new, and flood mitigation is the county’s top priority.

“Nothing is new,” George said. “It’s all been in the works. When it comes to a flood bond, it is based on our need and based on our projects, and so it is nothing decided overnight.”

The county selected the majority of the proposed projects based on federal grants, which often pay for the majority of a project’s cost so long as the local entity promises to fund the remainder of the bill, Vogler said.

The grants and bond money to pay for the local match are needed because the FBCDD is spending down its fund balance on projects, he said. According to Fort Bend County’s latest Hurricane Harvey County Damage Summary, the 2017 storm cost about $80 million in damages, and the county has spent about $18 million so far to supply the local match portion of various federal grants, Sturdivant said.

“We’re not in bad standing. It’s just we’re getting into a gray area,” Vogler said. “So what the [commissioners] want to do is this [bond] to borrow this money to facilitate these projects, and we can pay it over time.”

Additionally, about $3 million of the bond referendum will go toward the county’s watershed study, a project that began in mid-2018 and is expected to be completed at the end of 2020, Vogler said.

The study is examining the county’s streams, creeks, bayous and infrastructure, and it will provide a cost-benefit analysis of various projects the county can pursue to improve the county’s flood mitigation and drainage.

Although the bond addresses several necessary projects throughout the county, Riverstone resident Rob Thompson said he feels his neighborhood, which saw a lot of flooding during Harvey, has been overlooked.

“Riverstone flooded because the water had nowhere to go,” Thompson said. “All the rainwater just sat on Riverstone because it didn’t have enough capacity to pump it out of the district.”

Thompson, who formerly served as board president for Riverstone Levee Improvement Districts 15 and 19, said LID 19 has several projects in need of completion.

“The really big project they need is to build more pump capacity and more storage,” he said.

This decision to change the facilities bond into a flood mitigation bond was prompted by discussions with residents, homeowners associations, city mayors and other Fort Bend County constituents, Commissioners Vincent Morales of Precinct 1 and Ken DeMerchant of Precinct 4 said when announcing the switch at an Aug. 1 special court meeting.

“When you go to the voters and you put a bond out there, you certainly don’t want it to fail,” DeMerchant said. “I still feel like for sure there’s a need for these facilities. I feel like a facilities bond would have passed, but we decided to defer that for the future, and we’re just focusing on flood mitigation.”

When respondents were asked to select up to three bond referendums they would support, if any, 81% percent supported flood mitigation.

If the November bond referendum fails, the county will likely continue with the projects but at a slower pace, Sturdivant said. The projects will take longer to complete, which means construction costs will increase over time.

He said he expects the county to place a mobility bond referendum on the November 2020 ballot. And if the watershed study is completed by mid-2020, then the county may return to voters for additional bond money to fund more drainage projects.

Sturdivant said the county, which encompasses the Drainage District, can issue up to $450 million in debt over the next five years without a tax rate increase.

The facilities bond has been put on hold. Sturdivant said he does not think the court will be ready to place a facilities referendum on the November 2020 ballot.

“That was the one that actually started all this,” DeMerchant said. “That building is literally a disaster. We need to get out of that building sooner rather than later.”

“The commissioners are working on this as we speak; they will have an action plan,” Sturdivant said. “If something happens—a disaster or a hurricane—and we’re not prepared, then we’re doing the public a disservice.”