State board approves demolition of senior living facility at 2100 Memorial 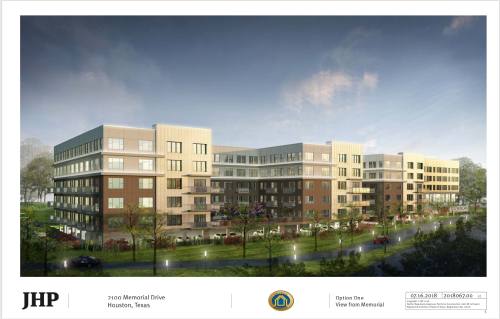 A rendering depicts the initial redesign plans for a senior living facility at 2100 Memorial Drive that flooded during Hurricane Harvey.

The Texas Department of Housing and Community Affairs has approved the demolition of an affordable senior living complex that was flooded during Hurricane Harvey and has since faced legal obstacles from residents.

Some of the last remaining tenants at 2100 Memorial Drive, Houston, have until March 1, 2020 to voluntarily move out. If all tenants vacate before then, demolition can take place earlier, TDHCA Director of Asset Management Rosalio Banuelos told board members Sept. 4.

The building, which originally was a repurposed Holiday Inn hotel, will be rebuilt with five stories and 196 units. It will remain in use as an affordable senior living facility, the Houston Housing Authority confirmed. The existing facility had 197 units.

“If this place of went to commercial developers, the prices on the sales or rentals would be astronomical, so it's so good that we're taking this action ... preserving this incredible site for affordable housing,” TDHCA board member Leo Vasquez said.

The decision marks the first significant progress in the project following a two-year long legal battle that tenants initiated after they received notice shortly after Harvey that their leases were terminated and they must vacate the property within five days, court documents state.

Redevelopment of the building will take three years and all former tenants have the right to return when construction is complete, according to the HHA.

To prevent future flooding issues, the new building will be situated on top of “flood-friendly parking” and built 2 feet above the 500-year floodplain.

Tenants represented in the lawsuit filed by Lone Star Legal Aid, argued that the 5-day notice they received to vacate the property following Hurricane Harvey was not sufficient enough time to secure affordable housing of an equal quality.

“We lost everything, and then to kick us out on five days notice ... it was just too much. My heart sank,” Seven-year resident Paula Sitter said.

Sitter, who has since relocated, said she keeps in touch with other tenants who also had trouble finding adequate housing.

The HHA maintains the first-floor flood damage sustained after Harvey necessitated the redevelopment of the building.

Lone Star Legal Aid Attorney Richard Tomlinson said his primary goal was receiving an injunction so that tenants could stay for a longer period of time while they found suitable temporary housing.

“Short of a settlement, the state approval was not likely to move forward,” he said.

By the end of August, all tenants on the lawsuit settled out of court with the Houston Housing Authority, Harris County court records show. Tenants secured the right to return to the property when the redevelopment is complete and access to a Houston Authority coordinator to help find suitable temporary housing.