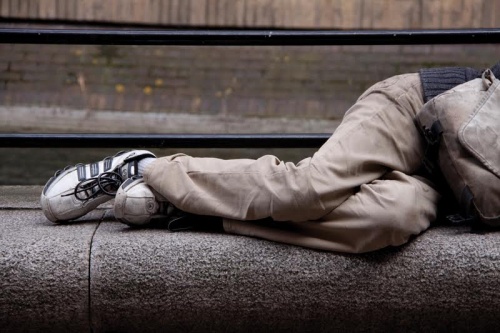 There are at least 42 people in McKinney experiencing homelessness, according to the 2019 Point-In-Time Census Report conducted in January.

Among the affluent and growing suburban neighborhoods of McKinney, Plano and Frisco lies a growing issue: homelessness.

While it is becoming more common to see homeless people at the libraries or along US 75 underpasses in McKinney, the scope of the problem is more difficult to track. But the signs are enough to spur the city and others to take immediate steps to reduce the numbers.

Communities across the country conducted a Point-In-Time Homeless Census Report in late January. Collin County identified 558 people experiencing homelessness—up 30.68% from 2018. In McKinney, 42 people were identified as homeless—three times the number reported in 2018, according to the 2019 PIT report.

But those numbers are not a true representation of homelessness, Christine Ortega, the vice chairperson of the Collin County Homeless Coalition, said in a previous interview with Community Impact Newspaper.

Ballesteros, who has worked with homeless people for eight years, said he believes McKinney’s homeless population is closer to 120—nearly triple the number identified during the PIT.

Concerns about homeless people heightened in late March when residents noticed people living and sleeping outside the library.

Mayor George Fuller said he has also heard of people living in the woods. Homelessness is a “much greater problem than what is known by counting [during the PIT],” he said.

City officials are banding together with groups to share resources and figure out how to address the issue. On May 21, McKinney formed a subcommittee made of council members, nonprofits and members of the Collin County Homeless Coalition. The McKinney Police Department is also forming a unit to work with homeless individuals.

As Collin County’s population continues to increase, the number of people experiencing homelessness is expected to follow suit.

“If the ratio of people that are doing OK and those that are on the cusp of homelessness or are homeless doesn’t change, the numbers are going to increase,” CEO of The Samaritan Inn Rick Crocker said. “… There’s still going to be a vast need here unless we do something vastly different.”

The Samaritan Inn is a nonprofit offering shelter to homeless people who are drug- and alcohol-free and have not been convicted of violent or sexual crimes.

Lance Olinski, founder of nonprofit Streetside Showers, said cities and counties need to address homelessness before it gets to “a crisis level.”

His nonprofit provides portable showers to those in need in McKinney, Denton, Irving and Plano.

“Every community in North Texas is struggling [with homelessness],” Olinski said.

The number of homeless students fluctuates throughout the school year and the PIT is a snapshot in time, said Jennifer Akins, MISD senior director of guidance and counseling services.

Akins also said she has seen more families move to other cities for cheaper housing and public transportation.

One of the main drivers for homelessness in Collin County is the lack of affordable housing. The median home value in McKinney in 2017 was $255,300 and the average monthly price of rent was $1,222, according to the U.S. Census Bureau.

However, those prices are often out of reach for people working lower-wage jobs. According to the PIT, 54% of homeless people are currently employed.

The need for affordable housing in McKinney outpaces the availability, Akins said. It is not a new problem, but it seems to be more prevalent this year than in previous years, she said.

The McKinney Housing Authority offers public housing and a voucher program; however, both have a waiting list.

To address the growing need, McKinney City Council approved a resolution June 18 for the city manager to apply for a grant to hire a case manager. The manager would assist homeless individuals and families.

In addition, a McKinney subcommittee held its first meeting June 24 to take a proactive approach to homelessness.

“I wish I could tell you that I have some grand plan,” Fuller said. “I don’t. My grand plan is to hear the facts, identify what reality is, ... talk to people that have been on the front line and then [determine] what we can do as a city.”

For its part, the police department is creating a community services unit to assist in crisis response, mental health, special needs and homelessness, Chief Greg Conley said in an email. The unit will connect people with social service providers as needed.

“The reason for the creation of this unit is simply the growing population of the city of McKinney,” he said.

Nicole Luna contributed to this article.