Greenway projects on Cypress and Spring creeks continue to advance 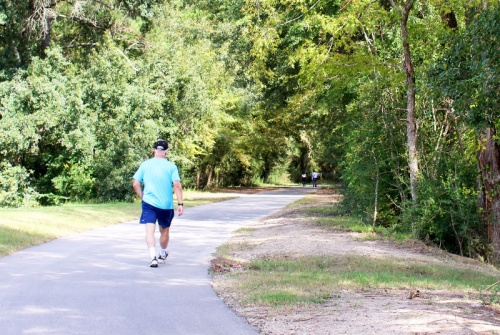 Kickerillo-Mischer Preserve, which is part of the Cypress Creek Greenway, opened in 2017.

Despite trail construction delays and other setbacks, the Cypress Creek and Spring Creek greenway projects are advancing and will eventually yield 40 miles of park and trail systems along both waterways, project planners said.

The projects seek to connect smaller parks to larger anchor parks through new and existing trails. Parks under development in the Spring and Klein area along the greenways include Champions Forest Park, which is slated to open early 2019 off Cutten Road, while hot spots for future trail construction include the segment along Cypress Creek from Meyer Park to Champions Forest Park, which is in the land acquisition phase.

As more trails connect, more entities are looking to become partners to tie into the existing greenway trails, including municipal utility districts and developers, officials said.

“We have been on a hiatus … with some potential partners because they’ve been dealing with flood issues [from Hurricane Harvey], but we’re at the point now where we’re going back to [discussions] with some of them to try to see if we can get back on the greenway working with them,” said Jim Robertson, chairman of the Cypress Creek Greenway Project.

Both projects are being funded through partnerships with entities including the Harris County Flood Control District, Harris County Precinct 4 and Texas Parks and Wildlife Department, among others. A portion of  Precinct 4’s funding also stems from a bond that passed in 2015, which designated $15  million to each precinct in Harris County for parks and trails projects.

However, project challenges have arisen, including homeowners and corporations that oppose trail construction by their property, such as at the ExxonMobil campus on the northeast corner of Energy Drive and Springwoods Village Parkway, which is part of the Spring Creek Greenway.

“When we get to I-45, we run into Exxon,” said Dennis Johnston, Harris County Precinct 4 parks director. “We haven’t figured out how to get around them yet.”

The Cypress Creek Greenway Project began  in 2004 as a committee within Cypress Creek Flood Control Coalition, a nonprofit organization. The project, which stretches from the junction of Cypress and Spring creeks to  west of Hwy. 249, is roughly 30 percent complete, Robertson said. Over time, Harris County precincts 3 and 4 have gotten more involved in the project, he added.

Precinct 4 either purchases land for the greenway or obtains recreation easements, which allows them to build and maintain trails across adjoining property, Johnston said, in addition to constructing parks.

The precinct is acquiring land to pave the segment between Meyer Park and Champions Forest Park, but it is too early to estimate a trail completion date, Johnston said.

Champions Forest Park is expected to open in early 2019 pending construction of restrooms and bids for playground construction, Johnston said. The original budget for the park was $400,000, but Johnston said he estimates the cost to be $600,000 upon completion.

The end goal, which could be several years away, is to connect Champions Forest Park with Kickerillo-Mischer Preserve on Chasewood Park Drive and the 100 Acre Wood Preserve, located west of Hwy. 249, through the greenway trail system, Johnston said. Kickerillo-Mischer was constructed in 2017 by Precinct 4 at a cost of $3.4 million.

Many of the greenway projects have been achieved through partnerships, Johnston said. There are ongoing discussions with potential partners, such as MUDs and landowners, to further build and extend trail connectivity along Cypress Creek, he said.

Meanwhile, Robertson said the greenway board is also resuming discussions with MUDs as well as the YMCA at Cypresswood Drive, Hewlett Packard Enterprise and Lone Star College-University Park by Hwy. 249 about building connectivity with the trails near the 100 Acre Wood Preserve. Discussions had been postponed after Harvey as the entities were working toward overcoming their flooding issues, he said.

“We are currently in discussion with MUDs about them building trails and possibly parks along Cypress Creek,” Robertson said.

This fall, Timber Lane started building a community center south of Cypress Creek Park slated to open June 2019, according to the utility district’s website. The project is partially funded with a $75,000 grant from TPWD.

The Spring Creek Greenway Project, which unofficially began in 1979, has also been making headway. Project partners include Harris County Precinct 4 and Bayou Land Conservancy, an organization that preserves land through conservation easements.

Precinct 4 submitted a $500,000 grant Oct. 1 to TPWD to build a boat launch at Edgewater Park, which is at the junction of San Jacinto River and Spring Creek. If approved, funds will likely be delegated in August 2019, and construction would begin shortly after, Johnston said. The project is expected to cost up to $3 million and will be partially funded from the remaining grant funds that were used to purchase the property, he said.

In mid-October, Precinct 4’s parks department opened the newest portion of the Spring Creek Greenway—the segment between Dennis Johnston Park and I-45—to form a continuous stretch from Hwy. 59 in Humble to the current terminus at I-45. The total cost was $2.75 million, Johnston said.

The plan is to go through Springwoods Village and connect to more than 200 miles of trails in The Woodlands, but construction has hit a roadblock at the ExxonMobil campus by I-45, Johnston said. The company has raised concerns over security issues, he said.

Mike Howlett, special projects coordinator for Precinct 4 parks, said in an email that it is imperative a trail route is established soon as walkers must turn around at the trail’s current terminus, and no enforcement measures are in place.

A representative from ExxonMobil stated the company is working with Harris County and CDC Houston, the developer of Springwoods Village, to find a solution that is feasible for all parties involved.

However, while several trail alignments are on the drawing board, no consensus has been reached. While waiting for a resolution, Precinct 4 is moving ahead and building a path from the west side of Springwoods Village to Willow Creek, with the eventual goal of connecting into Springwoods Village’s town square, Johnston said.

“We’ll now have the funding to complete the greenway … and preserve green space on the other side as well,” Cagle said. “We can have that land for the flood protection, then we can put our park systems on top of it.”

HCFCD allows passive recreational use on its property as long as it does not interfere with the preservation of the land or flood control, Cagle explained.

The bond also directs $50 million to HCFCD for right of way acquisition along Spring Creek to preserve and restore natural flood plains, which is a key focus for the Bayou Land Conservancy. The organization, which aims to preserve and protect the land’s natural ecological state, has conservation easements on about 2,500 acres of land along Spring Creek, Executive Director Jill Boullion said.

Boullion said that there is growing understanding in the community about the value of flood plain preservation, but there will always be entities that develop in the 100-year flood plain.

“I think that post-Harvey we’re starting to see some changes in that thinking, but ... we still have a way to go,” she said.