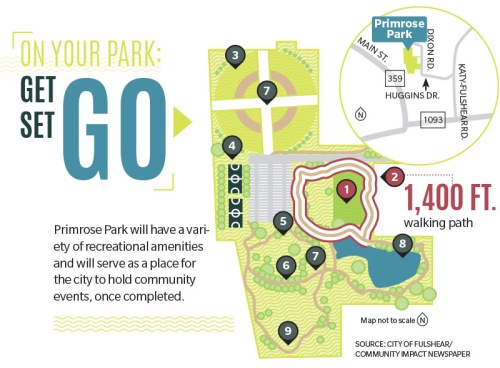 The city of Fulshear is developing plans for Primrose Park, a new $6.4 million recreational facility just west of Huggins Elementary on Dixon Road. The park will be about 25 acres, 10 acres of which was donated by city resident Sig Cornelius and his wife, Patricia Cornelius, who want baseball fields in the city.

“When we first moved out to the Fulshear area, we kind of noticed there wasn’t anything out here for those kinds of sporting activities,” Sig said. “[We] thought it could be something the community could use.”

The park will have baseball fields, basketball courts, walking trails, a water feature and a pavilion once completed. The project’s timeline will depend on funding availability, Assistant City Manager Brant Gary said.

Gary said the city is trying to fund development of the park in a way that minimizes the burden on taxpayers.

“We’re going to look at potential for bonds, potential for public-private partnerships, and then [if] all else fails, piecemeal implementation,” Gary said.

The first phase of development, barring additional funding, will come in the form of an 8-foot-wide walking trail, 18 parking spaces and an open-play area for football, soccer and other field games, Gary said.

City Council Member Kent Pool said the council hopes the new facility will serve as a place for children to play, participate in sporting events and for the city to host its festivals throughout the year.

“[Fulshear has] got five different festivals we have now, but one’s going to have to drop off if we don’t come up with another spot,” Pool said.

Paul Howard, a consultant with Burditt Land and Place, said the city will work to integrate the park into paths throughout the city to make the community more walkable.

Shirley Li, associate planner with Burditt, said the walkability plan would integrate the park and connect it to other parks, churches, City Hall and the library without driving.

For the Corneliuses, the focus remains on sharing their family’s love of baseball with the city.

“We just wanted a place for the children to go and to play, that was my main thing, and I knew that the baseball was important to [Sig],” Patricia said.