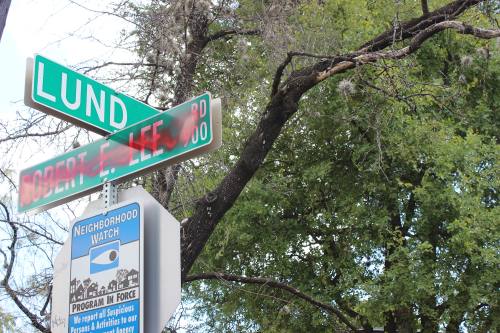 The violent Unite the Right Rally in Charlottesville, Virginia on August 12, 2017 to oppose the removal of a Robert E. Lee statue inspired a national reckoning to reconsider monuments of Confederate leaders. Almost immediately, Austin City Council began discussions to rename the two streets.

Robert E. Lee commanded the Confederate Army during the American Civil War between 1861 and 1865. For the name change, the city landed on Azie Morton Road. Azie Taylor Morton, an Austinite and graduate of Huston-Tillotson University who lived between 1936 and 2003, was the first female and first and only African-American to serve as Treasurer of the United States. Morton also served locally as an educator and, at the end of her life, with the Austin Housing Authority Board of Commissioners.

To replace Jeff Davis Avenue, the city chose to honor William Holland, an African-American born into slavery in 1840. After his father, a white man, purchased his freedom, Holland fought in the Union Army and later taught in Travis County schools. Holland served as a Texas state representative, county commissioner and played a crucial role in establishing the Deaf, Dumb, and Blind Institute for Colored Youth in 1887, located on Bull Creek Road between 38th and 45th streets. He later served as the institute’s superintendent.

The name change will affect 370 property owners along half-mile stretch between Burnet Road and West Koenig Lane. In a similar survey of property owners, 38 objected to the name change and 20 supported it. In the survey response, some property owners questioned whether Jeff Davis Avenue actually referred to the former president of the Confederacy and also voiced concerns over the name’s length and inconvenience involved with switching the street name.

Tens of people spoke in favor of the name changes on Thursday, though some objected. Speakers included Travis County Commissioner Jeff Travillion and former Austin Mayor Pro Tem Sheryl Cole. Cole, an African-American, told council to not underestimate the impact of this action.

District 7 Council Member Leslie Pool, who represents the area of the city where William Holland Avenue is, said Holland was an extraordinary individual and expressed pride in the renaming of the street.