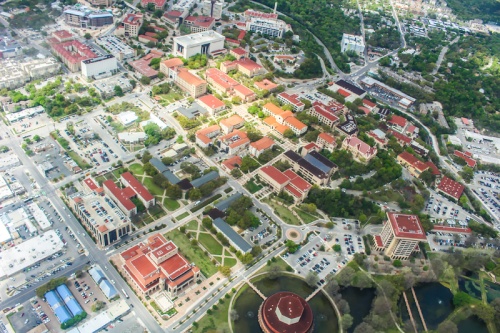 San Marcos residents have coexisted alongside Texas State University students for years, but as both the student and local population continue to grow, determining where and how to cohabit with a limited housing supply has caused friction over time.

A proposed five-story, 500-bed private student housing development near Texas State was the latest project to exasperate some local residents who said the 6.7-acre site on Peques Street—with its steep topography and proximity to four single-family homes—was no place for such a building.

San Marcos planning staff and commissioners agreed, recommending unanimously that the rezoning application that would allow such a development be denied.

The owner of the property, longtime San Marcos resident John Meeks, withdrew his application on April 9 rather than take it to City Council, where the application would have needed a supermajority vote to be approved.

Meeks told Community Impact Newspaper on April 9 he had no further plans at this time to develop the property.

“We still feel like [student housing] is the best option for that property,” he said.

This project, he said when pitching it to San Marcos residents during a meeting in March, offers a reprieve for San Marcos residents burdened by the presence of students in their single-family neighborhoods and on the streets and instead puts students within walking distance of campus, he said.

“When the right student housing is developed in the right locations, it alleviates the concerns you’re hearing from San Marcos residents,” he said. “The students are there. If [a student housing] project doesn’t get built, there’s not 500 kids that are not coming to Texas State.”

Last fall the Texas State board of regents approved a 10-year university master plan that outlines its strategic growth initiatives through 2027.

“Texas State University has a burgeoning student population and among the highest-utilized classroom/teaching laboratory spaces in the state of Texas,” officials wrote in the plan.

The plan shows the university will grow primarily in three areas: The Hilltop neighborhood, the Performance Arts Center neighborhood, and the Science and Engineering neighborhood.

Texas State plans to add 1,025 new beds for first-year, full-time freshmen and 33 percent of returning students.  During fall 2015, 6,870 students lived on-campus, and according to Eric Algoe, vice president of finance and support services, there is a waiting list for on-campus housing each year.

Algoe said in an email the university was “actively looking at different scenarios concerning graduate vs. undergraduate growth; growth at [the] Round Rock [campus] vs. [the San Marcos campus]; and growth associated with specific degree programs, among others.”

The university wants to make the Round Rock campus a “focal point for health professions education while ensuring the community is served for high-demand disciplines and professions,” according to the plan.

This year the university also added a doctoral degree program at the Round Rock campus, and over the next 10 years, the master plan says the university will “migrate the health professions” by creating a consolidated College of Health Professions, bringing academic courses such as communication disorders, physical therapy and respiratory care to Round Rock, and moving more health-related clinical space and research laboratories from San Marcos to Round Rock.

Lisa Dvorak, community liaison for San Marcos and its police department, said when cities play host to universities, not having a long-term strategic plan can lead to a shortage of affordable housing, behavioral issues and a lack of oversight from property managers.

She said the city began “enhancing” its relationship with the university in 2008 following a conflict in which police were repeatedly receiving complaints from one street heavily populated with students. In response, the university and San Marcos began the Achieving Communities Together, or ACT, Ally Program to reduce common sources of conflict, including noise, parking and trash complaints.

The program provides students with resources to assist in roommate issues, landlord disputes, maintenance concerns and leasing issues. Property managers pay a fee based on the number of bedrooms the development has to become ACT Ally members, which allows them to participate in off-campus housing fairs and guarantees them an advertisement in the annual off-campus housing guide as long as they follow the program’s requirements, which include not promoting alcohol consumption on marketing materials.

“The thing is, we never will get to a place to totally eliminate [conflict between students and locals],” Dvorak said. “That will continue, and our efforts are to continue [with the ACT Ally program] and work with the property managers that when a tenant is either violating the lease or disrupting the lease, that there are consequences.”

She said the city also turned to its codes and ordinances to strategize on where student housing should be directed in the future. The city’s comprehensive plan specifies multifamily development should be located in medium- and high-density areas.

In 2016 City Council adopted an ordinance requiring student housing developers with one or more buildings that each contained two or more living units designed, marketed or used for the primary purpose of housing college students to obtain a conditional-use permit from City Council.

In November, council added a clause to the ordinance saying property managers and landlords would have to provide temporary housing or offer assistance to students if the units were not ready for occupancy by the students’ first day of the lease.

And in February, Texas State and San Marcos agreed to issue a joint request for proposal to bring dockless bikeshare services to the area. The partnership would allow the selected company to operate dockless bikes around the city and on the university campus at no cost to the city or the university.

Meeks said the city cannot ignore the growth of the university going forward.

“The way to handle student housing is high density,” he said, adding he envisions dormitory-like structures near campus to decrease vehicular traffic.

He said the university should take responsibility for the demand of more beds, but state funding has been earmarked for research and academic space, not more residence halls, and the university is reliant on outside developers to supply housing.

“What that meant for the residents of San Marcos is that [students] had to live in the neighborhoods; they had to be integrated and not be professionally managed,” he said. “There’s a natural partnership between a large university and a smaller town, and there’s an actual friction. The more those groups can work together is where we’ve really seen a successful model. The more they combat, it can create more issues.”

Correction: This story has been updated to reflect that students who do not live on campus or in one of the off-campus private student housing units do not necessarily have to find somewhere to live within the city of San Marcos; they may choose to commute from somewhere outside the city.
SHARE THIS STORY