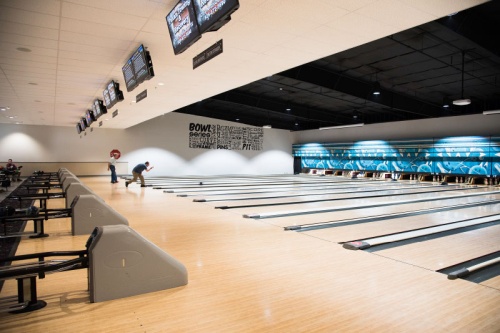 To General Manager Jason Fox, bowling is more than strikes, spares and gutter balls. He said he believes it is a sport that has brought generations of families together for decades.

Fox and owner Ray Walters opened Time to Spare Entertainment east of Conroe last May. The modernized 36-lane bowling center also offers a go-kart track, a full-service bar and kitchen, a live music stage, and many TVs and projectors. The business is also designing a 6,400-square-foot miniature golf course that could include between nine to 18 holes this year.

“We wanted to give something back to the community and create a fun venue,” Fox said. “Ray is an avid bowler. He loves the sport. I have been bowling my whole life; my grandparents owned the kitchen that was in the first bowling center that was in town. I grew up in this area bowling.”

Fox said he is seeing renewed interest in the sport. The venue attracts about 5,000 visitors on a weekly basis, including about 1,300 league bowlers.

Today, Fox he said he is seeing more involvement and new ideas come from the millennial population.
“The millenials are getting involved now, and they do things like craft beer leagues,” Fox said. “It’s thinking outside of the box to figure out how to bring bowling back for everybody.”

“It is a great outlet because there [are] a lot of kids in sports like football and basketball, but in bowling, they can compete,” Fox said. “It gives children an opportunity to be on a team.”