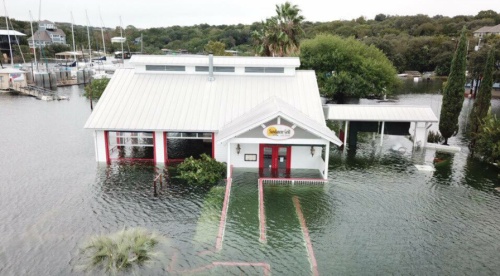 The Sundancer Grill sits at 690 feet. Lake Travis was at 697.5 feet as of Wednesday morning, and is expected to continue rising.

Sundancer Grill Owner Buzz Watkins said he closed his restaurant at 2 p.m. Tuesday after he realized flooding was inevitable.

Watkins also owns the Sail & Ski Yacht Club and Marina adjacent to the grill, and the boat dealership with the same name on the corner of Stewart Road and RM 620.

“We have six trailers behind the [Sundancer Grill] building that include the kitchen, wash area, fridge unit, food storage, and bathrooms–there are lots of functions for each trailer,” Watkins said. “My staff was working until midnight pulling those up to the boat dealership.”

Watkins said they were able to relocate all the important parts of the restaurant, and his staff filled the trailers with the majority of the restaurant’s contents. Watkins, who is also Vice President of the Friends of Central Texas Water Coalition and on the Lake Travis Chamber of Commerce Board, said he designed the grill with the waterfront location and possibility of flooding in mind.

“We created something that could be recovered quickly after a flood,” he said.

This is the first time the Sundancer Grill has flooded since it was built in 2010, although two years ago water came within about two feet from the floor, Watkins said. The restaurant sits at 690 feet, and as of Wednesday morning the lake was at 697.5 feet.

“You have to be ready for it,” Watkins said in regards to owning a lake-front business. “Lake Travis is a storage reservoir used to prevent flooding in Austin. It’s not only a water spot, but a flood management system, and it’s well designed for that.”

After lake levels go down and weather conditions are stable, Watkins said he expects it will take about a week to relocate the trailers and clean and prepare everything to be back in business.