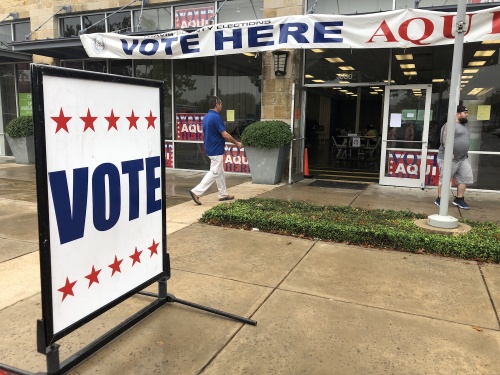 Voters enter a polling place at Southpark Meadows in South Austin to cast their ballots Nov. 6.

With all 143 polling locations reporting, the race for City Council’s Southwest Austin seat will, as many predicted, come down to a runoff between liberal newcomer Paige Ellis and conservative newcomer Frank Ward.

Ellis, a marketing specialist at an environmental consulting firm had earned just over 30 percent of the popular vote. With 24.7 percent, Ward, a commissioner on the city's parks board who has experience in federal and state government, finished with a 558-vote lead over environmental attorney Bobby Levinski, who had 22.93 percent. Rich DePalma, a longtime community leader and former vice chairman of the city’s parks board, trailed Levinski by 339 votes.

Since no candidate earned more than 50 percent of the popular vote, the top two vote getters will face off in a runoff election on Tuesday, Dec. 11.

“I’m feeling super energized,” Ellis told Community Impact Newspaper. “Everything has gone as planned and I really had faith this result would come out.”

Ellis said her grassroots campaign to reach people in the community shows that "hard work pays off." She said she wants the community to know that she is passionate about the environment and managing the growth of the city.

“I am very committed to representing the voice and views of my community,” he said. “I’m feeling good. I’m prepared for a runoff and looking forward to the rest of the results coming through."

Many with knowledge of City Hall predicted District 8 would head to a runoff, especially after first-term council member Ellen Troxclair announced she would not seek re-election. Troxclair, the lone conservative on the 11-member dais, was quick to endorse Ward, who she said would fight to keep taxes low and “fight for effective and efficient government.”

Troxclair’s decision to not seek re-election opened up a greater opportunity for a liberal candidate to represent the southwest district. Ellis, Levinski and DePalma all fashioned themselves as a left-leaning, environment-friendly change of pace for the district; however, as the polls show, the candidates had a difficult time separating themselves from one another.

With 124 of 143 locations reporting, Austin City Council’s District 8 seat appears to be headed for a runoff election. Paige Ellis leads the group with 9,297 votes, followed by Frank P. Ward III with 7,567. Bobby Levinski is in third place with 7,004 votes counted, while Rich DePalma trails with 6,680 votes.

With early voting results in Nov. 6, all four candidates vying for Austin City Council’s District 8 seat are within nine points of each other in a race that many predict will go into a runoff.

Paige Ellis leads the pack at 31 percent. The three other challengers are within two points of each other. Environmental attorney Bobby Levinski has 23.8 percent; Frank P. Ward III, a conservative candidate vying for the seat who has earned incumbent Ellen Troxclair’s endorsement received 23.3 percent; and Rich DePalma, a longtime community leader and former vice chairman of the city’s parks board received 22.2 percent.

Editor's Note: This article has been updated to correct Frank Ward's work experience and community involvement.