DELAYED: 3rd lane on SH 130 between Cameron Road and Hwy. 290 to open in late October 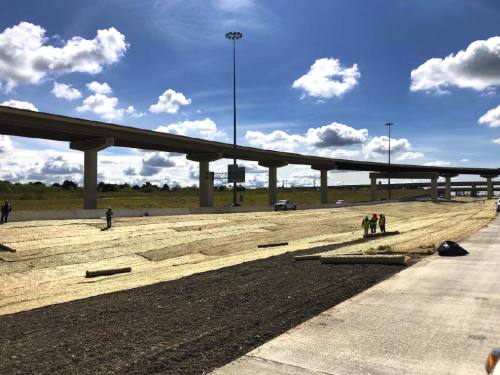 Crews laid down a soil retention blanket Oct. 2 along SH 130.

The Texas Department of Transportation reported Oct. 21 that overnight rains have delayed the opening of the third northbound travel lane on SH 130 between Cameron Road and Hwy. 290.

The department will provide an update when it has new dates for the opening of the northbound and southbound lanes.

Construction has wrapped up on a portion of SH 130 where crews have been adding a third lane in each direction to the toll road between SH 45 North in Pflugerville and SH 71 in East Austin.

The Texas Department of Transportation split the SH 130 expansion into two projects. The first project between SH 45 North and Hwy. 290 broke ground in October 2018. This project, costing $36.7 million and paid for with toll revenue, has three phases. The opening of the third lane between Hwy. 290 and Cameron Road is part of the first phase, according to TxDOT.

The rest of the project includes widening the bridges at the Howard Lane overpass, Gilleland Creek, Parmer Lane, Pflugerville Parkway, Wilbarger Creek and Cameron Road, according to TxDOT.

In February, crews began work on the second widening project on SH 130 between Hwy. 290 and SH 71 in East Austin for a cost of $56.1 million, also using toll revenues. This project will wrap up in mid-2021 and includes widening the bridges at the Colorado River, Harold Green Road, RM 969, Blue Bluff Road and other creeks, the state agency said in a news release.

The speed limit on SH 130 through the construction zones from SH 45 North to SH 71 remains at 70 mph.