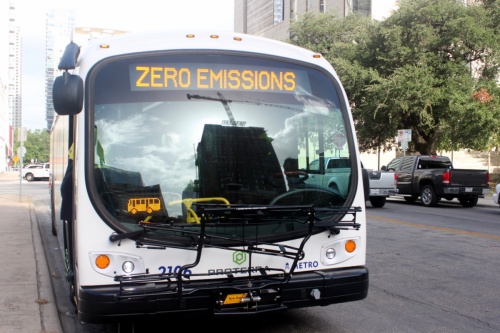 Electric buses do not have a tailpipe and produce no emissions because they are battery operated.

Capital Metro is one of several entities in the state receiving funding from the Texas Volkswagen Environmental Mitigation Trust settlement as a result of litigation over the automobile maker’s emissions control test devices.

The Central Texas transit agency announced Aug. 5 it will receive $3.5 million from the trust, the highest amount in Central Texas, according to a news release. About 590,000 light-duty diesel vehicles in Texas were affected by VW devices that were designed to defeat emissions control tests, according to the release. The Texas Commission on Environmental Quality announced 11 entities, mostly school districts, received a total of $14.6 million.

Capital Metro stated in its news release it will use the funds to help replace its diesel fuel fleet with cleaner buses.

The VW trust funding comes just over a week after the U.S. Department of Transportation announced July 26 Capital Metro would receive a $2.6 million Low or No Emission grant. Using the Federal Transit Administration grant, the agency will purchase six battery electric buses for a total cost of $6 million to $7 million, with Capital Metro footing the remainder of the cost.

Thx you very much @FTA_DOT for your grant award to move @CapMetroATX electric ⚡️? program forward! We appreciate the partnership and all you do to help advance more sustainable livable communities. https://t.co/GFA9QYFfD7

In 2018, the transit agency tested several electric buses. These buses typically can get up to 26 miles per diesel gallon compared to 3-4 miles per gallon of a traditional diesel-powered bus, according to a representative from Proterra. The agency’s board approved a contract with Proterra in April for 10 buses.

On Earth Day, April 22, the agency announced it will begin construction this fall on a charging facility in North Austin off Burnet Road for its electric bus fleet. That facility will open in 2020 and could house over 200 buses.
SHARE THIS STORY