Austin airport traffic to be affected by Hwy. 71 closure April 27-28 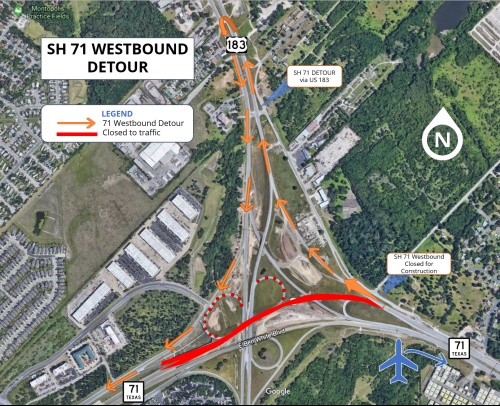 Drivers leaving Austin-Bergstrom International Airport may see traffic delays due to road closures on April 27 and 28.

The Central Texas Regional Mobility Authority will close a westbound section of State Highway 71 in order to demolish a bridge near Hwy. 183, where traffic will be detoured. The closure will begin April 27 at 6 p.m. and end at noon the following day, according to a news release by the Mobility Authority.

Cars coming from Austin-Bergstrom International airport will likely be affected by traffic delays, and so may those traveling into Austin from west of the city.

This bridge replacement is one of several planned for the Hwy. 183 and Hwy. 71 interchange as the Mobility Authority plans future expansion in the area. The new bridges should be taller and more accommodating to oversized vehicles, according to the news release.

The 183 South Project will make way for an eight-mile tolled expressway between Hwy. 290 and Hwy. 71. General purpose lanes are also being improved as the project continues through 2020.