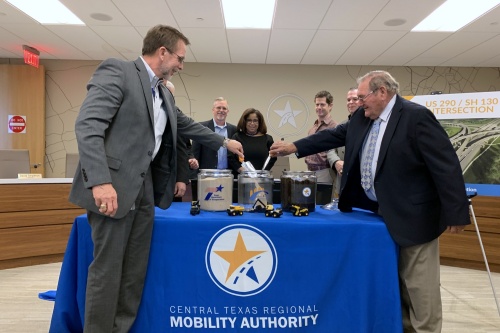 Terry McCoy, Texas Department of Transportation district engineer, left, and Jim Mills, former board member of the Central Texas Regional Mobility Authority, pour dirt from SH 130 and Toll 290 into a jar to celebrate the agencies' partnership on a project at Toll 290 and SH 130.

Drivers who use Toll 290 and SH 130 and those on the frontage roads could start seeing relief from traffic congestion by the end of 2021.

Construction began in December on a $127 million project to add three flyovers, or direct connectors, between the two toll roads east of Austin. Besides improving mobility on the two highways, the project is also expected to shift about 67 percent of vehicle traffic off the frontage roads, providing relief to those drivers who prefer a non-tolled option, according to the Central Texas Regional Mobility Authority, which is overseeing construction.

“A goal of the ... [Mobility Authority] is always to improve the improvements,” said Ray Wilkerson, chairman of the agency’s board of directors. “We try to always be cognizant of when things don’t always work.”

The Mobility Authority celebrated the start of construction Jan. 30 at its board meeting with a ceremonial merging of dirt from Toll 290 and SH 130. The agency celebrated along with the Texas Department of Transportation, which is its partner on the project.

TxDOT is providing $41.1 million toward the project for the eastbound Toll 290 to southbound SH 130 flyover, which will be non-tolled. Funding will come from toll revenue from the Central Texas Turnpike System, which includes SH 130 and SH 45 N.

TxDOT Austin District Engineer Terry McCoy said TxDOT made the decision to keep its flyover non-tolled to remain consistent with the existing eastbound Toll 290 to northbound SH 130 flyover that is also not tolled.

The Mobility Authority is financing the other two flyovers from northbound and southbound SH 130 to westbound Toll 290. Those two flyovers will be tolled.

“For many years [SH 130] was an underutilized facility; that is not the case today,” McCoy said.

McCoy said the expansion of SH 130 will work in tandem with the flyovers project to improve congestion in the area.

“We need the DCs, and they perform an independent function, but the roads that they tie to have to function well,” he said. “It’s that interconnectivity that we’re trying to establish.”