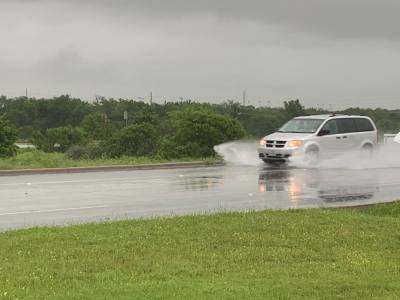 Local flooding was caused by rain May 8 in parts of Central Texas.

Although rain has stopped in much of the area, Hays County continues to be under a Flash Flood Warning until tonight at 6:15 p.m. According to the National Weather Service, low water crossings continue to be flooded and water will take time to recede.

A Flood Warning is also in effect for properties near the Blanco River at Wimberley until the Thursday morning. The river is expected to rise above flood stage this afternoon and will continue to rise into the evening, according to the Weather Service.

In Travis County, a Flood Warning was issued for Onion Creek at US 183 until Thursday evening. An Onion Creek Flood Warning is also in place from South Austin to Buda until late tonight, according to the Weather Service.

The Pedernales River is under a Flood Warning until Thursday afternoon as well, with impacts possible from Johnson City into western Travis County.

The Flood Warning for Barton Creek in Travis County also continues into the morning.

@NWSSanAntonio issued Flood Warning for Barton Creek from this evening to Thurs afternoon or until cancelled. At 1:00 PM Wed the stage was 6.3 feet. Flood stage is 8.0 feet. Minor flooding above flood stage by this evening & continue to rise to near
9.5 feet by tonight. pic.twitter.com/bYy3kEsIwt

Barton Creek, which experienced flooding over the weekend, is again under a Flood Warning as of 1:32 p.m. The National Weather Service issued the warning, cautioning those near the creek to take precautions to protect property and life if necessary. For now, the warning is in effect until the afternoon of May 8.

The city of Austin has again closed the Barton Creek Greenbelt Trail, which was closed due to flooding over the weekend.

The Weather Service has also extended its Severe Thunderstorm Warning for parts of Central Texas until 1:15 p.m.

The National Weather Service has issued a new Severe Thunderstorm Warning for northern Travis County and southern Williamson County from 11:58 a.m. to 12:30 p.m. Possible hazards include 60 mph wind gusts and lightning associated with the storm. Cities impacted by the storm could include Austin, Round Rock, Cedar Park, Georgetown, Pflugerville, Leander, Hutto, Lakeway, Lago Vista, Bee Cave and the Village of Volente.

The National Weather Service at 11 a.m. May 8 issued a Severe Thunderstorm Warning for parts of Travis County including the cities of Lakeway, Bee Cave and Lago Vista until noon.

A Severe Thunderstorm Watch was also issued through 1 p.m. for many Central Texas counties, including Hays, Williamson, Blanco, Burnet, Comal, Gillespie and Llano, according to the National Weather Service.

At 7:31 a.m. a Flash Flood Watch was issued for the area until 7 p.m. According to the alert, localized flooding is possible across parts of the Texas Hill Country and the Austin metro area. Isolated thunderstorms traveling through the area could produce up to 3 inches of rain, creating flooding due to saturated ground caused by rain over the past week.

According to a news release by the Lower Colorado River Authority, floodgate operations this morning were underway only at Tom Miller Dam. However, LCRA is monitoring rainfall and is ready to open additional floodgates along the system of dams on the Highland Lakes if necessary.

"Rain is in the forecast for the rest of the week, with moderate to heavy rainfall possible through the weekend," the release stated. "This is a serious situation, and we encourage everyone to remain alert to local conditions and to be ready to take action to stay safe."
SHARE THIS STORY

El Buen has evolved its mission since it was founded in Austin in 1987.