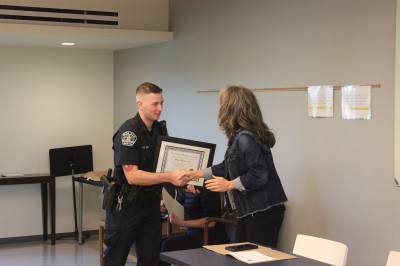 Officer Matthew Valli was one of three Austin police officers honored by the Oak Hill Association of Neighborhoods on May 15.

Three Austin police officers were honored on May 15 by the Oak Hill Association of Neighborhoods for responding to the scene when three women were threatened by floodwaters on May 3.

The women had attempted to drive through the low water crossing at Old Bee Caves Road and Highway 290. The low water crossing's gate was not down at the time, which would have signified a closed road. After a 911 call was received from the area, officers Matthew Valli, Kevin Perrydore and Benjamin Cochran responded to the scene and rescued the women, as well as a dog that was with them, using a rope.

Had the officers not assisted, the women and dog would have been at serious risk of washing down Williamson Creek, OHAN President Cynthia Wilcox said May 15.

The officers said it is not yet clear why the crossing arm failed to automatically descend when water was present.

Wilcox presented Valli, Perrydore and Cochran with "Meritorious Service" awards, praising them for “gallantry and intrepidity in the face of great danger.” In addition, Astin Police Department Commander Michael Eveleth presented the officers with Commander’s Coins for their roles in the rescue.

“When you’re in the middle of the street, in the middle of the [water] current, you don’t really take in what’s really happening. You just get it done,” said Eveleth of the officers. “Afterwards, they looked at the video and they could see just how close they actually were to washing off in the water.”

Wilcox also said that the incident indicated a need to prioritize flood safety measures in the city, and thanked the officers for their quick response, noting a general shortage of police officers in the area.