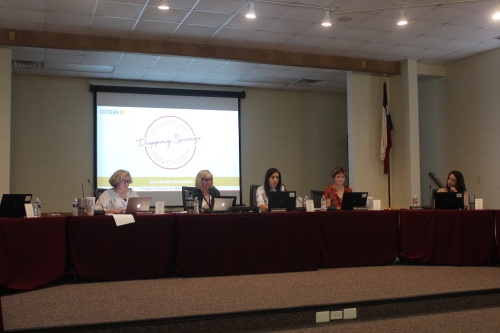 After a longer-than-usual break between meetings, the Dripping Springs ISD board of trustees will reconvene Wednesday, Oct. 30—a change from the board’s usual Monday meeting time.

DSISD has not lacked for announcements since its September board meeting; the district has incurred several awards this month, including a rating of “superior”—and a numerical grade of 100—on the Financial Integrity Rating System of Texas report released by the Texas Education Agency, according to district communications. Additionally, Dripping Springs High School was named a National Unified Champions School by Special Olympics, a designation meant to honor “an inclusive school climate that exhibits a sense of collaboration, engagement and respect for all.”

District communications confirm that the board is on track to vote on a lone finalist for the district’s open superintendent position Oct. 30, which is consistent with the timeline originally laid out by the district at the onset of the superintendent search process.

The search process, led by the Texas Association of School Boards’ Executive Search Services, has been in full swing over the last month. Since the board’s last meeting, the district has had ten special called meetings related to the search, beginning with a meeting to discuss applications the district had received for the position on Sept. 30.

If the board does vote to approve a lone finalist for the position at their meeting, the district will not be able to officially hire that individual until a state-mandated 21-day waiting period has elapsed. The district’s timeline identifies Nov. 21 as the projected date of hire.

A range of items set for action

In total, DSISD trustees are scheduled to address ten items up for a vote. Other items of interest include a potential vote on a lineup for the district’s Student Health Advisory Council. DSISD’s SHAC has had a high profile in the district this year, having made recommendations on a new sex education curriculum. If approved, the 2019-20 committee will consist of 14 parents, teachers, staff and community members, according to district documents.

Also on the agenda is discussion on an employee retention incentive plan for the district, which would offer staffers “a lump-sum employee compensation payment of up to $100 per completed year of service with Dripping Springs ISD.”