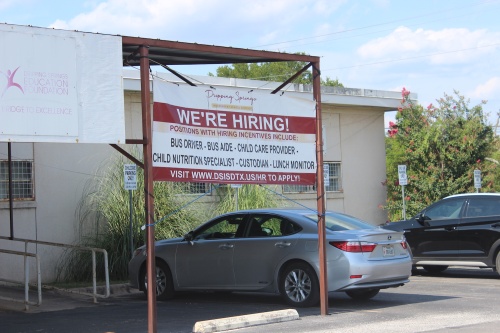 Dripping Springs ISD has chosen a search firm to lead the identification of a new superintendent.

At a special called meeting on Aug. 2, the Dripping Springs ISD board of trustees voted 6-0 to approve Texas Association of School Board’s Executive Search Services as the third-party firm to lead the search for a new DSISD superintendent. Only trustee Barbara Stroud was absent for the vote.

Board discussions about possible search firms commenced earlier this week, following the July 25 news that current DSISD superintendent Bruce Gearing would depart the district to take on the superintendent role at Leander ISD. At a July 30 meeting, the board heard proposals from both TASB ESS and Education Solutions & Services’ Search Services. Two other firms contacted the board after that time, but due to concerns about the records of those firms as well as time constraints, the trustees chose to vote on the firms that had formally presented.

Both trustee Joanna Day and board president Carrie Kroll cited the thoroughness of TASB ESS’s presentation and its lower price point as reasons for their preference. TASB ESS is the same firm that led DSISD's last superintendent search, resulting in the selection of Gearing.

TASB ESS will also aid in the selection of an interim superintendent. According to a press release sent after the Aug. 2 meeting, a meeting is scheduled to interview candidates for the interim position on Aug. 15.

The board also voted unanimously to appoint former Dripping Springs High School Principal Joe Burns as part-time interim assistant superintendent for learning & innovation at the meeting. Burns retired from his role as principal at the end of the 2018-2019 school year, and now replaces former Assistant Superintendent for Learning & Innovation Nicole Poenitzsch on a temporary basis.

Kroll said that the assistant superintendent role would be filled on a permanent basis once a superintendent has been hired and can oversee that the selection.
SHARE THIS STORY