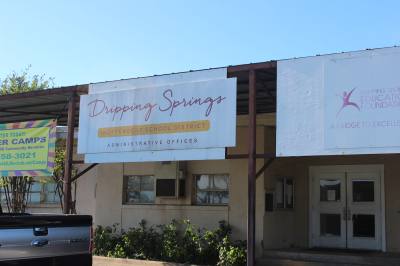 Dripping Springs ISD's board of trustees gathered on May 13 for an Agenda Review.

At its May 13 agenda review meeting, the Dripping Springs ISD board of trustees discussed preliminary plans for a new Bond Oversight Committee, a district-independent organization that would review the implementation of the 2014 and 2018 DSISD construction bonds, which are funding ongoing construction projects in the district.

Superintendent Bruce Gearing said his recommendation to create such a committee was influenced by the presence of similar committees in other area school districts. He said he would propose a nine-member committee, with Assistant Superintendent of Finance and Operations Scott Drillette serving as district liaison.

Trustees also discussed recommendations brought forth by DSISD’s Mental Health Task Force. Gearing reported the task force’s recommendation that, among other changes, a licensed mental health professional be added to the staff at Dripping Springs High School to assist with issues including crisis intervention. The superintendent cited barriers to mental health resources in Dripping Springs community-wide, noting that many professionals in the city do not accept insurance.

“The deeper we dig, the clearer it becomes to us that this is an urgent need in the district,” Gearing said.

The new high school staff member would handle an estimated case load of around 40 students.

Both the proposed formation of the Bond Oversight Committee and implementation of the mental health task force recommendations will be presented at the next public board meeting on May 20, but will not be presented as action items accompanied by a vote until a later meeting.
SHARE THIS STORY

El Buen has evolved its mission since it was founded in Austin in 1987.