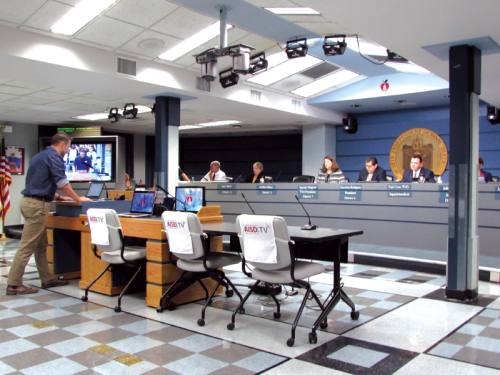 Representatives from nonprofit Environment Texas on Oct. 29 asked district trustees to promote solar energy and incorporate solar power at every district campus by 2025.

Emma Pabst, a clean energy associate with Environment Texas, said during a public comment session that the district’s 2013 bond package included $10 million that was earmarked for solar installation across the district.

“Five years ago, Austin ISD made a promise to voters that they would spend $10 million on solar,” she said. “We saw eight solar installations go up across the district, the largest Austin ISD has seen yet.”

“Austin can be a dynamic example to fight climate change, and AISD has an opportunity to lead the way,” speaker Bowen Wilder said. “We already know the district cares about renewable energy projects and has taken significant initiatives in implementing solar energy in the last few years, but there is still room to improve.”

Wilder said investing in solar at campus schools, where space is available, could reduce operating costs and create a positive image of energy conservation for the district.

According to Environment Texas, 45 campuses in AISD currently have solar panels. A total of $20 million for district energy conservation was included in the approved 2013 bond, according to district documents.

After public comment, trustees Jayme Mathias and Ann Teich said they would like the district to report back on what bond money may remain from 2013 for energy conservation.