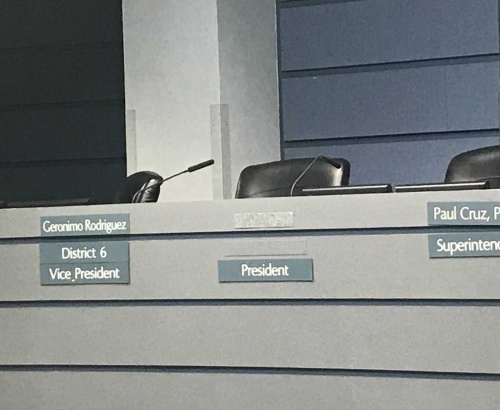 Updated May 22 at 12:15 a.m. to include information from the May 21 Austin ISD board of trustees meeting.

Austin ISD board of trustees unanimously elected Trustee Geronimo Rodriguez as its new board president after a lengthy executive session at the conclusion of Monday night’s regular meeting.

“I really appreciated the leadership of Vice President Rodriguez during these months and really look forward to [his] leadership of our board, bringing us together, focusing on student outcomes,” Trustee Jayme Mathias said at the meeting.

Trustee Amber Elenz said that during executive session there was “quite a lot of discussion” about what qualifies people for officer positions on the board. Officers are not running the board, but instead help move the board work forward, she said.

“It’s not just about the people that we’re putting in there, but the willingness that each of them has to serve the board,” Elenz said.

Wagner said that given recent events on the board, she feels Rodriguez’s calmness and demeanor on the dais will be “more important than ever.”

Austin ISD board of trustees President Kendall Pace on Monday morning announced she has resigned from the board after inflammatory text messages with another board member surfaced last week.

Education Austin, the labor union for Austin ISD employees, held a press conference May 16 asking Pace to resign her position on the board of trustees. Education Austin President Ken Zarifis said that Pace “needs to step down from the board, not tomorrow, not next month, but today,” after the union learned of this “disturbing” text message exchange.

Discussing the Texas Education Agency’s Transformation Zone Program in a text message, Pace said to AISD board member Julie Cowan, “[grants will] only get approved if we set up a real, charter-like [zone],” and “ignore the special interest groups, crazy ignorant community activists and poverty pimps.”

The Austin ISD board of trustees will meet for its regularly scheduled board meeting Monday in the Carruth Administration Center, located at 1111 W. Sixth St., Austin, at 7 p.m.

While nothing is currently on the meeting agenda regarding Pace’s status on the board, an official announcement and actions could be taken, including the election of new board officers.