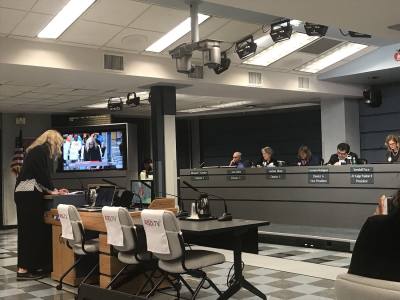 The Austin ISD board of trustees tonight officially began the process to rename five district schools after a motion passed in a 7-2 vote, with trustees Julie Cowan and Ann Teich opposing the motion.

The five campuses selected are currently named after individuals who have some ties to the Confederacy.

“Unfortunately, as far as I can tell, I will be the only African American who has had the opportunity to vote on the appropriateness of naming AISD schools after confederate associated individuals in our district’s history,” Trustee Edmund T. Gordon said before making the motion. “With this motion I mean to correct this injustice.”

Teich said if the reason to change a school’s name is because the name taints the educational environment of the schools, the district also needs to consider the names Stephen F. Austin and James Dewey as inappropriate.

“If we continue to shame and blame people they will stop listening to us, and forgiving people when they have done wrong is an important piece of this conversation about race,” Teich said. “Shaming and blaming people stops conversation, and forgiving and having a conversation with those people is a key component of moving forward and changing hearts and minds.”

Teich and Cowan both pointed to the financial cost of changing school names as part of the reason they voted against the motion.

“I do not think that while AISD is facing a $30 million shortfall that any additional dollars should go towards this effort,” Cowan said. “Spend money on additional teachers and academic pursuits that will increase reading achievement and college readiness scores. Spend money on making schools safer.”

At a meeting Nov. 13, Brian Hill, special projects lead for the superintendent, said renaming a school can carry a cost of about $13,800 for elementary schools and up to $77,000 for high schools. Costs include logo changes; new uniforms for extracurricular activities; and changes to signage, stationery and forms.

Teich challenged community members who have been vocally in support of changing school names to donate $5,000 to a fund to pay for the change.

“I think you should put your money where your mouth is,” she said. “I’m not comfortable taking it out of the operating budget.”

Trustee Yasmin Wagner said the board could have decided to “kick the can down the road” based on financial challenges facing the district, but was proud to support the name changes.

“I think we have an opportunity to finally make a change tonight,” she said.

“What a privileged day in Austin ISD, in a district that is no place for hate, to be able to look to the future and the values we would like to share with the students of the future,” Mathias said. “We acknowledge that various values of the past were values of the past, but we also acknowledge that maybe those values are not values we want to be teaching our students today.”

According to a draft timeline presented to the board, the board is scheduled to vote on new school names at a meeting on May 21. Community members can nominate new names for the schools from Feb. 27-March 16. Campus Advisory Councils will review names and nominate three finalists by April 13, the timeline states.

This story was updated to include trustee quotes from the Feb. 26 meeting.
SHARE THIS STORY