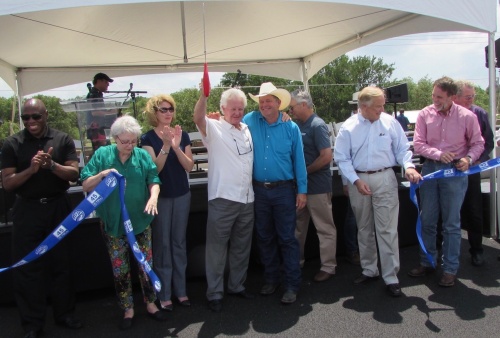 SH 45 SW was first proposed in 1985, and after years of planning, lawsuits, changes in local leadership and evaluating funding options, it officially broke ground in 2016.

Ray Wilkerson—the chairperson of the Central Texas Regional Mobility Authority, which will operate the road—said at the event that transportation and quality of life are connected, and roads such as SH 45 SW help improve the quality of life for many in the area.

"This particular project might be, in all my years of public service, the one I'm most proud of," he said. "We had some opponents to the project, but the courts validated us. This is one of the safest roads we've ever build. I hope this becomes the model for road building in Central Texas."

Travis County Commissioner Gerald Daugherty, who said he first ran for office in 2002 to advocate for the road's construction, said it took a joint effort by both Hays and Travis counties to get the road built. Both counties "bonded together" to contribute money to the project that would benefit residents of both, he said.

"This relief is long overdue, and residents deserve this vital new connection," Daugherty said. "It will give a reliable way into Austin, [which] we hope it will not be through Brodie Lane [anymore]."

According to CTRMA Executive Director Mike Heiligenstein, the road will give those who work in Austin access to affordable houses in Hays County. Hays County motorists who currently commute through South Austin to get to MoPac Expressway can will be able to use the toll road to circumvent local traffic and save time, while also reducing traffic for South Austin residents on roads like Brodie Lane.

"To say I am thrilled to have the road open is an understatement," said State Rep. Vickie Goodwin, who lives in South Austins and drives on Brodie Lane.

Wilkerson said with the population in the Austin area expected to continue to increase over the next 20 years, local officials should be proactive as opposed to reactive when planning similar projects that will help residents.

"Eventually this road won't stop at [FM] 1626, but will go to [I-35]," Hays County Commissioner Mark Jones said. "We appreciate the people of Brodie Lane, who have dealt with [Hays County commuters] for 34 years but won't miss us [when we're gone]."