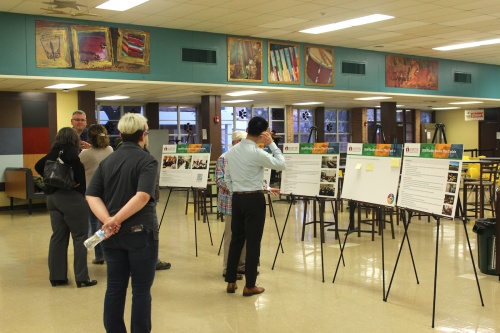 Austin ISD is facing a significant budget shortfall: As district enrollment has dropped by roughly 5,000 students over five years, annual pressures felt through required recapture payments to the state have increased.

After approving a budget with a deficit of over $28 million last summer, AISD Chief of Business and Operations Nicole Conley Johnson said the district could face a $65 million deficit for fiscal year 2019-20 if cost-cutting measures are not taken and no additional state funding is given to the district. However, that projected deficit would be significantly lower if state lawmakers pass school finance reform during the ongoing legislative session, she said.

Additionally, both the district’s financial staff and budget stabilization task force, a group of citizens formed by the district to evaluate the budget, have presented possible cuts and savings that could mitigate a deficit in the future.

One idea presented by both groups included closing or consolidating schools to better use district resources. While the schools involved have yet to be determined, trustees in February approved a timeline that outlined what the process will look like.

“It’s the estimation of this trustee that schools must close,” District 2 trustee Jayme Mathias said at a Feb. 26 board meeting. “We’re continuing to spread less and less students over the same number of facilities or an increasing number of facilities.”

For years, AISD leadership has looked for ways to mitigate the effects stemming from fewer students coming into the district and more funds from local taxes going into the state recapture program.

An AISD staff proposal in December outlined possible budget reductions, including consolidating up to 12 unnamed campuses and shoring up operational inefficiencies over 3 years.

Robert Thomas, one of the task force’s chairs, said that criteria considered when creating solutions were impacts on student achievement, equity, enrollment and feasibility. The task force estimated school closures could save the district $800,000 to $1.2 million per campus.

The district is also looking toward the state’s 86th legislative session for some relief. Conley-Johnson said a current proposal could substantially put the district on a better path toward solving some financial issues and closing its budget gap.

At a press conference in the Texas Capitol on March 5, members of the state house of representatives laid out House Bill 3, a $9 billion plan to put more state money into school finance, cut property taxes and increase teacher pay.

Conley-Johnson said if the proposal becomes law, the new dollars that flow into AISD will be able to both sustain programs that the district knows are effective and provide salary increases for teachers and staff.

Even if there is an injection of funds into AISD from the Capitol that could solve some of the district’s budget challenges, Conley-Johnson said that school consolidations would still likely take place. Through the process, the district is working to put its students in the best possible learning environments while being mindful of using taxpayer funds efficiently, she said.

“We would make those decisions, presumably, even if there wasn’t the financial pressure, because there are better things we could do with our money to support our kids more,” Conley-Johnson said.

As the district has discussions about closing and repurposing campuses, it also plans to modernize or construct 17 facilities as part of the $1.05 billion bond package approved in 2017. Construction has started on some of those campuses, including in South Austin at Menchaca and Blazier elementary schools.

With consolidations alongside modernization, Superintendent Paul Cruz said there is an opportunity to cut down on overhead costs, put more students in modern learning spaces, improve programming and solve community needs.

“The opportunity here is around creating these 21st-century learning spaces for all of our students, having as many students as we can in fully modernized, hi-tech facilities,” Cruz said. “It’s not about closing. It’s not about consolidation. Could that be an effect of what we’re trying to do? Yes, but the intent is looking at this information collectively. We want to be better and stronger than we are today.”

The consolidation timeline approved by trustees in February will wrap consolidation scenarios in with the development of a 2019 Facilities Master Plan. Factors being considered in the process include academic and facility conditions, programs offered, enrollment trends and transportation needs.

According to Melissa Laursen, an AISD planning services and facilities manager, the master plan will lay out a roadmap for modernizing schools within the next 25 years. Along with outlining consolidation options, the plan will include strategies to reduce the number of portables districtwide, and will focus on enhancing district programs involving current technology education, fine arts and athletics.

Preliminary scenarios for consolidations will be presented at a board work session in August, with the facilities master plan up for approval in October. According to the timeline, consolidations could be in effect by August 2020.

“The timeline that we have here suggests we as a board will be making decisions by October 2019,” Mathias said. “We are going to make a decision in 2019 to right-size this district and to do what boards before us have failed to do.”

While the goal of consolidations will be to better utilize campuses, the task force’s report said possible closures “cannot occur exclusively” at underenrolled campuses. It suggested school consolidations should occur alongside redistricting into new boundaries.

Those suggestions speak to some of the challenges AISD will face in the consolidation process. Half of the district’s schools serving East Austin students are under-enrolled, and in that area of the district 80 percent of students are economically disadvantaged.

At a February meeting, AISD resident Dusty Harshman asked the district to view the upcoming school consolidation plan as a “school integration plan.”

“Let’s use our reinvention roadmap
to balance the socio-economic enrollment in our schools and more truly reinvent the urban school experience,” he said.

Trustees echoed the sentiments, saying AISD must look through an equity lens when creating scenarios.

help with the process, but the district’s guiding principles will be used to address equity in the meantime.


“I feel hopeful that we can achieve the kind of equity that we’re looking for, but we can’t wait for that equity officer to be hired,” District 3 trustee Ann Teich said. “We have to move forward.”

By involving the community in the process and ensuring equity, District 9 trustee Arati Singh said consolidation can be a positive thing for residents.

“There is a negative narrative that schools that are going to be consolidated are going to be feeling pain,” Singh said March 5. “Change is hard, but if people know they will get something really nice, something amazing in return and can actually visualize that, to me that’s actually going to [help communities and the district].”