The history behind the name Convict Hill in South Austin 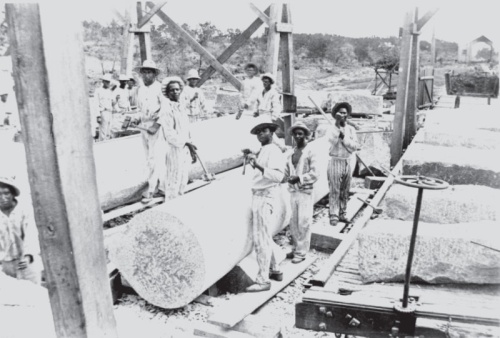 Inmates quarried granite in Burnet and limestone in South Austin.

Ralph and Margaret Mock have lived on the corner of Westview and Beckett roads since 1959. Back then, Convict Hill Road ended at gravel-covered Beckett.

“It was country out here,” Margaret said. “This was all ranchland.”

But in the 1880s, long before the Mocks purchased their 2 acres for $1,500, nearby Convict Hill was, in fact, temporarily inhabited by inmates.

“Convicts lived and worked up on the hill,” she said. “Rumor has it one or two of them died.”

No known records indicate the death of any inmates who worked at 1,000-acre Oatmanville Quarry in the Oak Hill neighborhood. However, documents at the Austin History Center confirm that hundreds of convicts quarried limestone in Southwest Austin and granite in Burnet in the late 1880s to construct the Texas state Capitol.

On Nov. 9, 1881, the original Capitol building burned down. Plans for a new structure specified the use of a local, light-gray limestone. After spending nearly $100,000 to quarry limestone at Oatmanville, the initial 60-ton load was rejected for containing iron pyrites, which oxidized when exposed, resulting in discoloration.

The building commission changed the specifications to use Texas red granite from Burnet County on the outside of the building. Limestone from Oatmanville was still used for foundation and basement walls, cross walls and backing for exterior walls, according to the documents.

The cost increased by $520,025.50—no small sum in 1885—with the switch to granite, a heavy material that required changes to the overall plans such as improving the construction of the dome, adding iron rods and more, the commission’s records show.

During the summer of 1885, contractor Abner Taylor wrote a letter requesting the use of convict labor in order to decrease the overall cost of the project. On July 25 the Texas Legislature approved Taylor’s request, using up to 500 prisoners from state penitentiaries.

The decision to use inmate labor was controversial, as evidenced by a labor strike. The International Association of Granite Cutters voted 500-1 to boycott the Capitol construction project. Taylor hired 86 stonecutters from Scotland at wages of $4 per day, importing skilled labor to supplement the convicts’ work.

According to the contract, the convicts in Oatmanville worked 10 hours a day. Throughout the course of the project, they loaded rail cars with nearly 280,000 cubic feet of limestone.

Today, little visible evidence remains of the quarry and the railroad. The rails—lightly graded—were pulled up in 1888, when the Capitol was completed. A nature trail and a park bear the name Convict Hill but little resemblance to the quarry of the 1880s.

“Some people say [the convicts’] ghosts are here, still working near the old railroad tracks,” Mock said. “But we’ll probably never know for sure.”