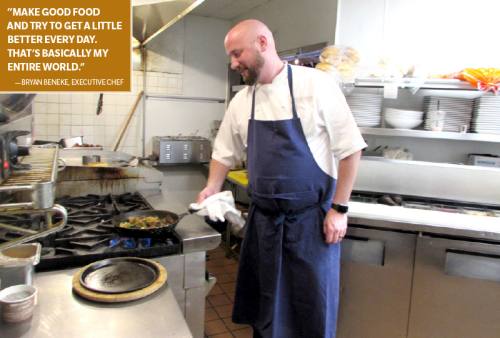 Hideaway serves “elevated Southern comfort food” in a venue that is decorated with a laid-back, rock ‘n’ roll theme in mind, Beneke said.

Open seven days a week for breakfast, lunch and dinner, Hideaway’s menu features Southern classics such as biscuits and gravy, fried chicken and waffles, and short ribs. The menu also includes egg plates and pancakes for breakfast; sandwiches; large plates; and appetizers, such as pork belly sliders, chips and queso, and deviled eggs.

“I’m a chef before I’m a GM, so we focus on the food,” he said. “Make good food and try to get a little better every day. That’s basically my entire world.”

Between graduating from Bowie and starting Hideaway Kitchen & Bar in 2018, Beneke said he attended The Culinary Institute of America in New York, worked as a chef with Four Seasons Hotels and cooked in a number of places, stopping in France, Atlanta and Maui.

He moved back to Austin with his family in the late 2000s. Since, he said he has worked at two popular Austin brunch spots, serving as the executive chef at the South Congress Cafe and head chef at Snooze on North Lamar Boulevard before starting Hideaway.

“I’m an optimist,” he said. “The thing about moving so much is that you take the good and leave the bad, so I’ve loved every place I lived, but Austin is home for me.”

“This year has been a great thing,” he said. “I feel like Austin has embraced us a little bit because month after month it’s been getting busier.”