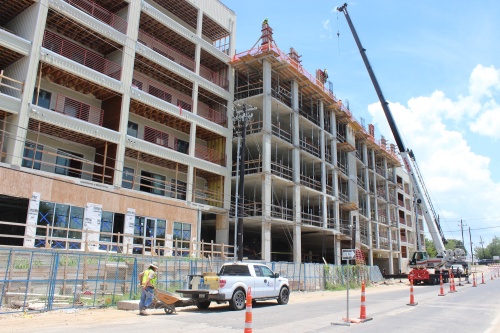 Rezoning applications have been submitted to the city of Austin for two properties on far South Congress Avenue where developers hope to build multi-family residential projects.

The applications, submitted by the applicants' attorney Michael Whellan, were processed Oct. 20 by the city's Development Services department.

The first application refers to a 3.39-acre property at 4515 S. Congress Avenue that currently houses a Life Storage facility. The applicant, Lemco Holdings LLC, is seeking a zoning change that would permit the construction of a residential project exceeding the current vertical building height regulation of 40 feet. If rezoned, Whellan said the maximum height would be 60 feet.

According to the application, the project would include 270 multi-family units, 200 of which would be one-bedroom floorplans and 70 of which would be two-bedroom plans. A pool and clubhouse are also included in the plan. The developer is choosing to pay a fee in lieu of parkland dedication.

The second rezoning application is in regards to a 0.68-acre property at 4401 S. Congress Avenue. Whellan said earlier this year a rezoning application at 4411 S. Congress Avenue was submitted by the applicant, Sabot Development Ltd., and this small parcel would be added to that project. The same vertical mixed-use zoning change is being pursued; however, the 840-square-foot project includes only 30 multi-family units—24 one-bedroom floorplans and six two-bedroom plans.

To move the projects forward, the applicants must first obtain approval from the Land Use Commission, followed by City Council. Although not required, a letter of approval by the South Congress Combined Neighborhood Plan Contact Team would be the applicants' "golden ticket" to approval, said Mario Cantu, chair of the team.

However, Cantu said he and his team are worried about continued development in the area displacing longtime residents.

"If these condos go up, taxes for those properties go up and we displace people who could normally live there for a long time," he said. "It's a concern."

No affordable units are currently included in either project, according to the applications.

"We as individuals who live in this neighborhood know there is a huge affordable housing issue," Cantu said. "Our contact team plans to meet with these developers and ask them about their intent. What about affordable housing?"