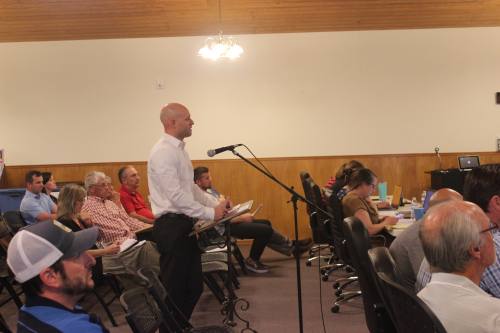 In a move to uphold an agreement made with residents of the Blue Sky Ranch housing development, Dripping Springs City Council denied a requested zoning amendment ordinance on Sept. 10 that would have allowed the development of a QuikTrip gas station and convenience store on a property at the corner of Hwy. 290 and Sawyer Ranch Road.

The 10-acre property sits in front of Blue Sky Ranch, the residents of which had worked with the city to establish a conditional overlay prohibiting gas stations, convenience stores and laundromats from being built on the neighboring property.

The property’s landowner initially requested an amendment to the overlay in June, but faced opposition from residents of Blue Sky Ranch, who cited concerns about the effects of having an all-night operation near the neighborhood, including diminished dark skies and increased noise pollution. Also of concern were potential safety hazards and diminished property values. At that time, Mayor Todd Purcell urged the landowner and residents to work towards a mutually suitable compromise, citing the benefit for residents of having some control over the property’s ultimate development.

At the September council meeting, QuikTrip real estate project manager J.D. Dudley presented a compromised proposal for the property’s development, including 2.5 acres at the dividing edge of the property that would remain undeveloped to provide a buffer between the gas station and the community, and two acres that would be reserved for drainage retention only.

“We will forgo half of [the developable land] and just not touch it,” Dudley said.

However, Blue Sky Ranch residents persisted in speaking out against the proposal, despite the concessions Dudley offered, saying that the development would betray a key understanding they had operated under when becoming homeowners.

“We didn’t want to raise our family behind a gas station,” said resident Todd Simmons, who arrived at the meeting with his five-month-old child in tow.

While the council ultimately sided with residents and denied the zoning request, councilmembers expressed appreciation for Dudley’s attempt to appease homeowners, and trepidation for development to come—namely QuikTrip’s expressed plan to develop on an adjacent property if denied, as Dudley had warned.

“I fear for what will come next,” said councilmember John Kroll. “But in my opinion, the city made a commitment [to these residents] when we put the conditional overlay in place.”